Welcome to the Emily Dickinson Museum:
The Homestead and the Evergreens 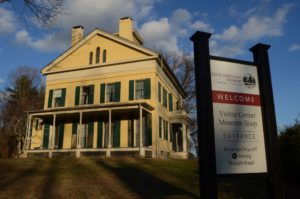 The Museum was created in 2003 when the two houses merged under the ownership of Amherst College. The Museum is dedicated to sparking the imagination by amplifying Emily Dickinson’s revolutionary poetic voice from the place she called home.

The Homestead and The Evergreens, with such close ties in the nineteenth century, saw their paths diverge in the twentieth. The Homestead was sold in 1916 to another Amherst family and underwent some modernization. In 1965, in recognition of the poet’s growing stature, the Homestead was purchased by Amherst College and open to the public for tours. It also served as a faculty residence for many years.

Next door, The Evergreens, occupied by Dickinson family heirs until 1988, remained virtually unchanged for a hundred years. In 1991, The Evergreens passed to a private testamentary trust, the Martha Dickinson Bianchi Trust (named in honor of Emily Dickinson’s niece), which began developing the house as a museum. 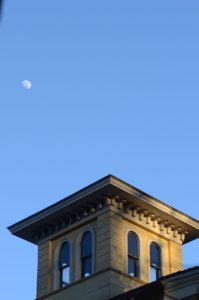 The Moon above the Homestead cupola

Collaborations between the Homestead and The Evergreens began as the Martha Dickinson Bianchi Trust prepared to open Austin Dickinson’s house to the public in the late 1990s. The success of these joint efforts suggested that uniting as one museum would have great advantages for the public as well as for administration and governance of the sites. Together the houses tell a more complete story about the poet, her family, and the world in which she lived.

To that end, The Emily Dickinson Museum was created on July 1, 2003, when ownership of The Evergreens was transferred by the Martha Dickinson Bianchi Trust to Amherst College. The merger of the houses and the three acres on which they stand restored the property to the state Dickinson herself had known, furthering the College’s long-standing and complex associations with the Dickinson family and its stewardship of Emily Dickinson’s poetry and other manuscripts.