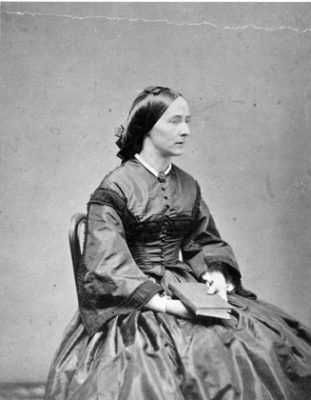 Abby Maria Wood Bliss was Dickinson’s “particular friend” (L8) and schoolmate at Amherst Academy. Together with Abiah Root, Harriet Merrill, and Sarah Tracy, Abby Wood and Emily Dickinson made up the close group of girlhood friends that the poet called “our circle of five” (L11).

Both Emily and Abby were born in 1830, Abby on October 12, in Westminster, Massachusetts. By 1838, after her father Joel’s death left her mother burdened with several small children, Abby was living in Amherst with her Uncle Luke Sweetser, a well-respected member of the community.

Their friendship reached a turning point in 1850 when Abby joined Amherst’s First Congregational Church, succumbing to a powerful religious revival of that year. Although the two friends had both been uncommitted, Emily early on recognized that Abby “only desires to be good” (L23).  After Abby joined the church, Emily acknowledged that they now “take different views of life” (L39). Dickinson never did join the church.

In 1855 Abby married the newly-ordained minister Daniel Bliss, an 1852 graduate of Amherst. The couple sailed off on a mission to Syria, where they spent the remainder of their lives, and where Reverend Bliss founded the Syrian Protestant College (now The American University of Beirut).  Dickinson’s friendship with Abby had “drooped a little” (L91) in the early 1850s, but when the time came for Abby to depart, Emily presented her with their shared Virgil text.  In it she had written out line 203 of Book I of the Aeneid, which she translated as “Afterwards you may rejoice at the remembrance of these (our school days)” and then inscribed it “When I am far far away then think of me—E. Dickinson.”

While the intimacy of their relationship changed, the two never lost touch. They both retained their interest in botany and horticulture (subjects they had studied at Amherst Academy), and there is strong evidence that Abby sent botanical specimens for Emily’s herbarium, as well as a piece of olivewood, from the Middle East.

When Abby brought her children from Syria for a year’s visit to Amherst in 1873, she found that Emily “had become the village mystery, inaccessible to all but an elect few, who were admitted to the sanctuary with appropriate preliminaries and ceremonies.” Abby, demonstrating her own honest and independent spirit, would have none of it, and claimed her right to be “received on the old basis” (Daniel Bliss, The Reminiscences of Daniel Bliss, New York: Revell, 1920. Cited in The Years and Hours of Emily Dickinson, ed. Jay Leyda, Vol. I, New Haven: Yale University Press, 1960, p. 205).

Inspired by the visit, Emily composed:

Daniel and Abby Bliss had four children, Mary, Frederick, Howard, and William. All four spent the academic year of 1873-74 in the Amherst school system, and the two older sons later graduated from Amherst College.  Frederick Bliss, a good pianist, often played for Emily Dickinson, while Howard Sweetser Bliss became a good friend of Emily’s nephew Ned Dickinson. Howard succeeded his father as President of Syrian Protestant College in 1902. Together Daniel and Abby dedicated their lives to education through their missionary work in Syria. Abby died on April 12, 1915, the year before her husband. Both are buried in the Anglo-American Cemetery in Beirut.