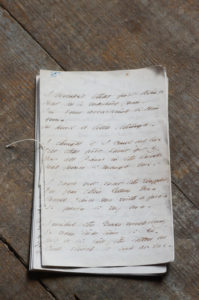 “We dont have many jokes tho’ now, it is pretty much all sobriety, and we do not have much poetry, father having made up his mind that its pretty much all real life. Fathers real life and mine sometimes come into collision, but as yet, escape unhurt.”

Despite Dickinson’s humorous depiction of a home life that was less than poetical, in truth her “real life” contained much poetry.

Emily Dickinson composed almost 1800 poems, but fewer than a dozen were published in her lifetime. This section of the web site explores many aspects of her poetry and offers tips for reading her poetry. It also introduces her letters, a rich source of information and insight into the poet’s life and mind.

About citations from Dickinson’s work:

Dickinson’s letters and poems are cited frequently throughout the website.  Please note the following:

“L” followed by a number refers to a letter written by Emily Dickinson as published in The Letters of Emily Dickinson, ed. Thomas H. Johnson and Theodora Ward (Cambridge, Mass.: The Belknap Press of Harvard University Press, 1958).