Using the poem below as an example, this section will introduce you to some of the major characteristics of Emily Dickinson’s poetry. 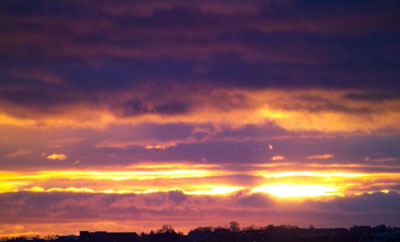 Sunrise in the Connecticut River Valley near Amherst.

I’ll tell you how the Sun rose –
A Ribbon at a time –
The steeples swam in Amethyst
The news, like Squirrels, ran –
The Hills untied their Bonnets –
The Bobolinks – begun –
Then I said softly to myself –
“That must have been the Sun”!
But how he set – I know not –
There seemed a purple stile
That little Yellow boys and girls
Were climbing all the while –
Till when they reached the other side –
A Dominie in Gray –
Put gently up the evening Bars –
And led the flock away –
(Fr204)

Like most writers, Emily Dickinson wrote about what she knew and about what intrigued her. A keen observer, she used images from nature, religion, law, music, commerce, medicine, fashion, and domestic activities to probe universal themes: the wonders of nature, the identity of the self, death and immortality, and love. In this poem she probes nature’s mysteries through the lens of the rising and setting sun.
Sometimes with humor, sometimes with pathos, Dickinson writes about her subjects. Remembering that she had a strong wit often helps to discern the tone behind her words.

Dickinson’s poems are lyrics, generally defined as short poems with a single speaker (not necessarily the poet) who expresses thought and feeling.  As in most lyric poetry, the speaker in Dickinson’s poems is often identified in the first person,“I.” Dickinson reminded a reader that the “I” in her poetry does not necessarily speak for the poet herself: “When I state myself, as the Representative of the Verse – it does not mean – me – but a supposed person” (L268).  In this poem the “I” addresses the reader as “you.”
Like just about all of Dickinson’s poems, this poem has no title. Emily Dickinson titled fewer than 10 of her almost 1800 poems. Her poems are now generally known by their first lines or by the numbers assigned to them by posthumous editors.
For some of Dickinson’s poems, more than one manuscript version exists.  “I’ll tell you how the Sun rose” exists in two manuscripts. In one, the poem is broken into four stanzas of four lines each; in the other, as you see here, there are no stanza breaks.
The poem describes the natural phenomena of sunrise and sunset, but it also describes the difficulties of perceiving the world around us. Initially, “I” exhibits confidence in describing a sunrise.  As the poem, like the day, continues, “I” becomes less certain about what it knows: “But how he [the sun] set – I know not – / There seemed a purple stile.”
One of Dickinson’s special gifts as a poet is her ability to describe abstract concepts with concrete images. In many Dickinson poems, abstract ideas and material things are used to explain each other, but the relation between them remains complex and unpredictable. Here the sunrise is described in terms of a small village, with church steeples, town news, and ladies’ bonnets. The sunset is characterized as the gathering home of a flock. The shifting tone between the beginning and the end of the poem, the speaker’s more confident telling of the sun’s rise than of how its sets, suggests that more abstract questions about the mystery of death lurk within these images.

The meter, or the rhythm of the poem, is usually determined not just by the number of syllables in a line but by how the syllables are accented. Dickinson’s verse is often associated with common meter, which is defined by alternating lines of eight syllables and six syllables (8686). In common meter, the syllables usually alternate between unstressed (indicated by a ˘ over the syllable) and stressed (′).  This pattern–one of several types of metrical “feet”–is known as an “iamb.”  Common meter is often used in sung music, especially hymns (think “Amazing Grace”). {Below is an example of common meter from “I’ll tell you how the Sun rose.”}
However, as Cristanne Miller writes in Reading in Time: Emily Dickinson and the Nineteenth Century, Emily Dickinson experimented with a variety of metrical and stanzaic forms, including short meter (6686) and the ballad stanza, which depends more on beats per line (usually 4 alternating with 3) than on exact syllable counts.  Even in common meter, she was not always strict about the number of syllables per line, as the first line in “I’ll tell you how the Sun rose” demonstrates.
As with meter, Dickinson’s employment of rhyme is experimental and often not exact. Rhyme that is not perfect is called “slant rhyme” or “approximate rhyme.” Slant rhyme, or no rhyme at all, is quite common in modern poetry, but it was less often used in poetry written by Dickinson’s contemporaries. In this poem, for example, we would expect “time” to rhyme with “ran.”

Dickinson most often punctuated her poems with dashes, rather than the more expected array of periods, commas, and other punctuation marks.  She also capitalized interior words, not just words at the beginning of a line.  Her reasons are not entirely clear.
Both the use of dashes and the use of capitals to stress and personify common nouns were condoned by the grammar text (William Harvey Wells’ Grammar of the English Language) that Mount Holyoke Female Seminary adopted and that Dickinson undoubtedly studied to prepare herself for entrance to that school. In addition, the dash was liberally used by many writers, as correspondence from the mid-nineteenth-century demonstrates. While Dickinson was far from the only person to employ it, she may have been the only poet to depend upon it.
While Dickinson’s dashes often stand in for more varied punctuation, at other times they serve as bridges between sections of the poem—bridges that are not otherwise readily apparent.  Dickinson may also have intended for the dashes to indicate pauses when reading the poem aloud.

Dickinson’s editing process often focused on word choice rather than on experiments with form or structure. She recorded variant wordings with a “+” footnote on her manuscript. Sometimes words with radically different meanings are suggested as possible alternatives.  Dickinson changed no words between the two versions of “I’ll tell you how the Sun rose.”
Because Dickinson did not publish her poems, she did not have to choose among the different versions of her poems, or among her variant words, to create a “finished” poem.  This lack of final authorial choices posed a major challenge to Dickinson’s subsequent editors.