A Letter always feels to me like immortality because it is the mind alone without corporeal friend. –  Emily Dickinson to Thomas Wentworth Higginson,  June 1869 (L33) 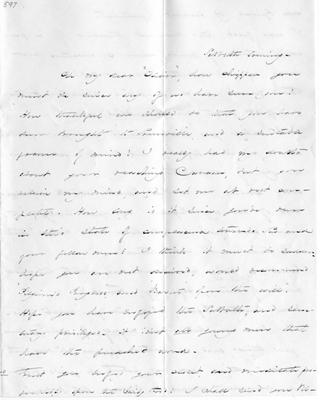 Emily Dickinson, pre-eminent poet, also distinguished herself as a writer of letters, which she regarded as a “joy of Earth” (L960). Cryptic and allusive in style, dazzling in verbal effects, and sensitively attuned to her recipients, Dickinson was a prolific and gifted epistolary artist.

Scholars estimate that the printed editions of her letters represent only about one-tenth of the letters Dickinson actually wrote. While others may yet be recovered, many were probably destroyed, according to the custom of the time, upon their recipients’ deaths. Nonetheless, the thousand extant letters to about a hundred friends and family members are an extensive and profoundly revealing record of the poet’s intellectual interests and emotional journeys.

The existing letters date from 1842, when Dickinson was eleven years old, until the final “Little Cousins, / Called back” letter to Louise and Frances Norcross just before her death in 1886 (L 1046). Her early letters reveal much about her relationships with her friends and family, her changing attitudes toward her religious experiences, and her year away from home at Mount Holyoke Female Seminary. Her later letters, often more epigrammatic, include exquisite condolence messages for grieving friends, notes to her brother’s family next door, and, of course, poetry.

Very few letters to the poet remain. Dickinson had asked that her sister Lavinia, upon the poet’s death, destroy the letters she had received during her lifetime. It was while fulfilling this request that Lavinia discovered Emily’s poem manuscripts.

Even Dickinson’s earliest editors recognized the significance of Dickinson’s correspondence to understanding the poet behind the verse. All those enlisted for this first stage of introducing a remarkable poet—Susan Huntington Gilbert Dickinson, Mabel Loomis Todd, and Thomas Wentworth Higginson—quickly identified the letters she had written to family and friends as too closely identified with the poems to be disregarded.

To satisfy Dickinson’s readers in the 1890s, Mabel Loomis Todd prepared a two-volume edition of Dickinson’s correspondence, which she collected with Lavinia Dickinson’s assistance from relatives and friends. Although highly selective and heavily edited, Todd’s Letters of Emily Dickinson (1894) provided insight into the poet’s family life, examples of the poet’s epistolary exchanges with prominent men of letters, and illustrated Dickinson’s practice of sending warm and engaging notes accompanied by gifts of flowers or baked goods. Missing from the early volumes were letters to key correspondents like Susan Dickinson and Judge Otis Phillips Lord, as well as some of the draft manuscripts now referred to as the “Master” letters. 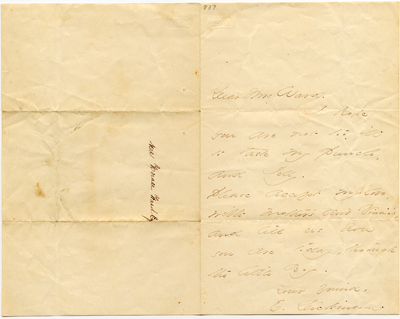 The 1955 edition of Emily Dickinson’s poetry–the first complete edition–edited by Thomas Johnson, led to the publication of the impressive three-volume The Letters of Emily Dickinson (1958). Edited by Johnson and Theodora Van Wagenen Ward, The Letters of Emily Dickinson was the first work to contain all known extant letters from the poet. The availability of Dickinson’s correspondence so soon after the publication of her complete poems catapulted the study of Dickinson into new realms. Biographers have found Dickinson’s letters crucial to piecing together the poet’s life; among the most significant correspondences were those with brother Austin, mentor Thomas Wentworth Higginson, and sister-in-law Susan Dickinson. Literary scholars have examined Dickinson’s letter writing in a discussion of genre—was Dickinson writing in prose, or poetry, or some new form altogether as she developed her letter-writing skills? The manuscript letters, which are often dated, have also aided scholars in dating the poem manuscripts, which usually did not include a date.

As new work on Dickinson emerges, her letters will continue to offer insight into the life of the reclusive “myth of Amherst” and her poetic artistry.

1958 The Letters of Emily Dickinson  Edited by Thomas Johnson and Theodora V. Ward. Belknap Press of the Harvard University Press

1965 The Lyman Letters: New Light on Emily Dickinson and Her Family Edited by Richard Sewall. Amherst, Mass.: The University of Massachusetts Press