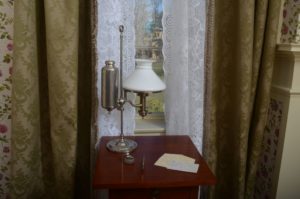 A view of the poet’s writing table looking out her bedroom’s south west window.

When, where, and how did Emily Dickinson put pen (or pencil—she used both) to paper to create her work?

Material evidence, such as envelopes and other scrap paper, suggests that Dickinson wrote down ideas for poems wherever she was inspired—in the kitchen or outdoors, for example—but contemporary accounts indicate that her formal writing was done in her bedroom, a place that, as she once described to her niece Martha, afforded her “freedom” (Bianchi, p. 66).

Located in the southwest corner on the second floor at the Homestead, the poet’s bedroom included a small work table with a single drawer. There, she could work late into the night on her poetry and letters.

Niece Martha described her aunt’s “way of writing” as taking place not only “upstairs in her own room, watching with her plants lest they freeze in zero midnights,” but also “by the little table in the dining-room” (Bianchi, p. 60). From the dining room Dickinson could see the plants in her conservatory.

Other relatives recalled hearing Dickinson compose her poems aloud. Her cousin Louisa remembered: “I know that Emily Dickinson wrote most emphatic things in the pantry, so cool and quiet, while she skimmed the milk; because I sat on the footstool behind the door, in delight, as she read them to me” (Scharnhorst, p. 485, as quoted in Woman’s Journal 1904).

More typically, Dickinson shared poems with family and friends through correspondence. After her death, her survivors were surprised to find that the poet had kept even more of her work private.  Among her papers were forty handmade booklets (now referred to as “fascicles”) in which she gathered more than 800 of her poems.