When Emily Dickinson died in 1886, she was unknown as a poet outside of a small circle of family and friends. Dickinson’s poetic legacy consisted of almost 1800 poems, and no instructions about what to do with them. 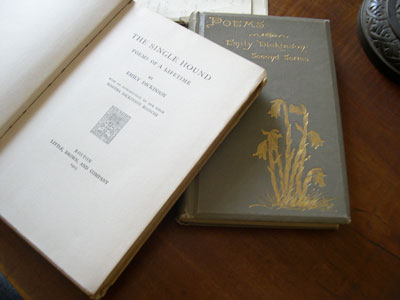 What was done with them, how Dickinson went from unknown to internationally-famous poet, is a story fraught with emotional intensity, differing loyalties, and personal sacrifice. None of the principal characters, all of whom had personal connections to the poet, ever expected to be involved in such an effort. Yet their sometimes competing contributions affirmed the vitality of Dickinson’s verse and ensured its immortality.

After discovering hundreds of Emily’s poems shortly after her death, the poet’s sister Lavinia resolved that the poetry must be published. She later wrote: “I have had a ‘Joan of Arc’ feeling about Emilies [sic] poems from the first” (Letter to Thomas Wentworth Higginson, December 23, 1890, as quoted in Bingham, p. 87). Lavinia approached two of the poet’s friends–sister-in-law Susan Dickinson and mentor Thomas Wentworth Higginson–for help.

Susan did not pursue publication quickly enough for Lavinia, and Higginson was otherwise occupied. To fulfill her vision, Lavinia turned to Mabel Loomis Todd, the vivacious young wife of an Amherst College professor. Todd was a momentous choice, for she was deeply involved in a love affair with Austin Dickinson, Susan’s husband and Emily’s brother.

Encouraged by the first collection’s success, Todd and Higginson published a second volume, Poems of Emily Dickinson, Second Series (1891). Public curiosity about the previously unknown poet prompted both editors, but especially Todd, to promote the work through lectures and journal articles. Todd alone edited a collection of Dickinson’s letters (1894) and a third volume of poems Poems of Emily Dickinson, Third Series (1896).

In 1898 a painful lawsuit between the Dickinson and Todd families over a small piece of land brought Mabel Todd’s involvement with the Dickinson family to an abrupt end. For more than thirty years she refused to raise the lid of her camphorwood chest filled with the Dickinson poems in her possession.

When Mabel Loomis Todd ceased her work on Dickinson’s poems, a period of quiet ensued in the publication story. Lavinia Dickinson, Thomas Wentworth Higginson, and Susan Dickinson all died, and Martha Dickinson Bianchi began to assume a larger role in shaping her aunt’s legacy. Having inherited Dickinson’s manuscripts from both Lavinia and Susan, Martha edited at least six volumes of Dickinson’s poetry. With a lighter editorial hand than her predecessors, Bianchi did not title the poems and kept their rhyme schemes intact. Incensed by publications about her aunt that she judged inaccurate, Bianchi wrote several memoirs to assert her unique perspective as “the one person now living who saw [Emily Dickinson] face to face” (Bianchi, p. xxii).

Eventually, Mabel Loomis Todd returned to Dickinson’s work, motivated to counter Bianchi’s efforts with the publication of her aunt’s poetry. With her daughter Millicent’s help, Todd began to edit the poems that remained in her possession, a project that she did not live to see finished. Her daughter completed the work on her mother’s behalf, and in 1945 published Bolts of Melody.

At last, most of Emily Dickinson’s poems were in print, yet no single edition contained them all. That situation changed with The Poems of Emily Dickinson, edited by literary scholar Thomas H. Johnson and published in 1955. Returning to Dickinson’s original manuscripts rather than using other editors’ transcriptions, Johnson more accurately presented all the poems (albeit in print) as Dickinson had written them. Unlike his predecessors, Johnson arranged the poems chronologically, carefully studying changes in the poet’s handwriting to do so, since she rarely dated her work. The Poems of Emily Dickinson allowed readers to study her development as a poet, initiating a tremendous surge in Dickinson research.