“My earliest friend wrote me the week before he died “If I live, I will go to Amherst – if I die, I certainly will.” 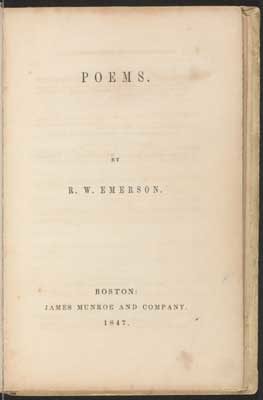 My earliest friend,” “My dying Tutor” (L265), “my Father’s Law Student” (L750), “The first of my own friends” (L110), “a gentle, yet grave Preceptor” (L153) “an elder brother, loved indeed very much” (L153) – these were all phrases Emily Dickinson employed in speaking of Benjamin Franklin Newton, a young man whose effect upon her development as a poet was early and profound, and to whom she long paid tribute.

Newton, as she called him, came to Amherst in the fall of 1847, a twenty-six-year-old aspiring law student desiring to study for two years in the recently formed partnership office of Dickinson and Bowdoin. Like other such law students of Edward Dickinson’s over the years, Newton became a familiar presence in the Dickinson household, befriending the Dickinson children and often partaking of family meals. Emily Dickinson met him just as she enrolled in Mount Holyoke Female Seminary, and she became acquainted with his love of books during several weeks the following March that she was home nursing a severe cold. She later wrote: “Mr. Newton became to me a gentle, yet grave Preceptor, teaching me what to read, what authors to admire, what was most grand or beautiful in nature, and that sublimer lesson, a faith in things unseen” (L153).

The spare facts of Ben Newton’s upbringing indicate he was born into a farm family in Berlin, Massachusetts, near Worcester, on September 30, 1821. Unable to afford college, and perhaps not of sturdy enough health to farm, Newton may have taught school during the decade before he came to Amherst. By that time he was widely read, and able to guide Dickinson to poets and authors he esteemed. She spoke afterwards of admiring “the strength and grace, of an intellect far surpassing my own,” which “taught me many lessons” (L153). Most important, he recognized Dickinson’s exceptional mind and encouraged her talent for writing. “All can write autographs, but few paragraphs, for we are mostly no more than names,” he inscribed in her autograph book when he left Amherst for Worcester in August 1849. (Dickinson’s autograph book is housed at the Houghton Library, Harvard University.)

Newton corresponded with Dickinson–most notably sending her Emerson’s Poems in January 1850–while he studied for the bar, opened his own law practice, and then became the District Attorney of Worcester County. He married in June 1851, and while he continued to write and to guide his young protégé, he evidently gave her few indications that his health was failing. News of his death from tuberculosis on March 24, 1853, shocked Dickinson when she read of it in the newspaper three days later. Loss of her “gentle, yet grave Preceptor” led her to rely principally on her lexicon (her dictionary) as her guide to writing poetry for several years to follow (see L261).

Although it has been suggested that Newton and Dickinson may have been romantically attached, this seems unlikely. The theory scarcely fits the tone of the three letters the poet wrote to Newton’s minister, Rev. Edward Everett Hale, for reassurance he had died peacefully. She did, however, regret for the rest of her life that the importance to her of this “first friend” had “slipped my simple fingers through / While just a Girl at school” (Fr418). She treasured the advice of his letters, and never forgot him.