“His Heart was pure and terrible and I think no other like it exists.” 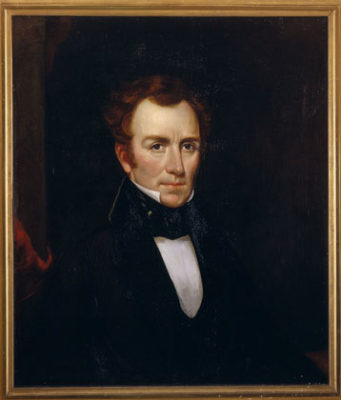 Edward Dickinson embraced the conservative Whig political party and embodied its ethics of responsibility, fairness, and personal restraint to a point that contemporaries found his demeanor severe and unyielding. He took his role as head of his family seriously, and within his home his decisions and his word were law. An incident Emily Dickinson described speaks volumes about life within her home: “I never knew how to tell time by the clock till I was 15. My father thought he had taught me but I did not understand & I was afraid to say I did not & afraid to ask anyone else lest he should know” (L342b).

The eldest of nine children of Samuel Fowler and Lucretia Gunn Dickinson, Edward was born on January 1, 1803. He grew up in the Dickinson Homestead and, earlier, in the house that preceded it. Educated in the district school and at Amherst Academy, he attended Yale College except for his Junior year, which was spent at Amherst College during its first year of operation. He graduated from Yale in 1823, attended the Northampton Law School for a year, and opened his own practice in Amherst in the fall of 1826. On May 6, 1828 he married shy, pretty Emily Norcross of Monson, Massachusetts, after a two and a half year courtship. Their three children were born in 1829 (Austin), 1830 (Emily) and 1833 (Lavinia).

During the time Edward was establishing his legal practice, his father’s great effort and financial overcommitment in helping found Amherst College led to the collapse of the family’s wealth in land holdings. Within a few years all members of his immediate family, one way or another, left Amherst for the rest of their lives. Edward remained, devoting himself to his legal career and laboring to restore his father’s blighted reputation as well as to regain some of his family’s financial well-being.

Edward for over forty-five years led a disciplined, civic-minded public life that included several times representing Amherst in the state legislature, serving thirty-seven years as treasurer of Amherst College, and being elected to the Thirty-third Congress from his region. He was a prominent citizen, active in several reform societies, on the board of regional institutions, and involved in major civic improvements, such as leading the effort to bring the railroad to town in the mid 1850s.

Ever respectful of her father’s nature (“the straightest engine” that “never played” [L360]), Dickinson obeyed him as a child, but found ways to rebel or circumvent him as a young woman, and finally, with wit and occasional exasperation, learned to accommodate with his autocratic ways.

Her early resistance slowly shifted to a mutual respect, and finally subsided after his death in pathos, love, and awe. Despite his public involvements, the poet viewed her father as an isolated, solitary figure, “the oldest and the oddest sort of foreigner,” she told a friend (Sewall, The Lyman Letters, p. 70), a man who read “lonely & rigorous books” (L342a), yet who made sure the birds were fed in winter.

Edward Dickinson’s lonely death in a Boston boardinghouse following his collapse while giving a speech in the state legislature the hot morning of June 16, 1874, was unbearable to the whole family. The entire town closed down on the afternoon of his funeral, and his eldest daughter later paid this tribute: “Lay this Laurel on the one\ Too intrinsic for Renown -\ Laurel – vail your deathless Tree -\ Him you chasten – that is he -” (Fr1428).