“A dark cold morning. Children at church. I at home reading Emerson on immortality with the good and silent company of my pipe.” 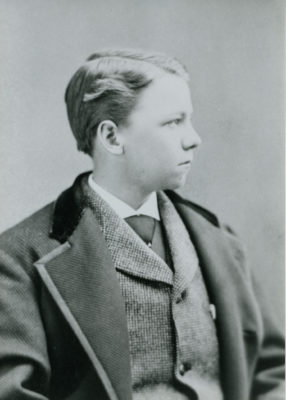 Austin and Susan Dickinson’s eldest child was born on June 19, 1861. Named Edward, after his paternal grandfather, he was called “Ned” within the family. Although the poem Emily Dickinson sent to Susan at Ned’s birth admits her “fear of joggling Him!” (L232), she developed a very close and gleeful relationship with her nephew. They shared a pleasure in playing with words. “Ned tells that the Clock purrs and the Kitten ticks. He inherits his Uncle Emily’s ardor for the lie,” Dickinson crowed in a letter to her friend Elizabeth Holland, when Ned was not yet five (L315).

In February 1877, Ned had a seizure that greatly worried the family, and these attacks of epilepsy recurred. In light of these and other health issues, Austin arranged for Ned to take an “abbreviated course” at Amherst College, attending classes but not sitting exams and hence not receiving an official degree.

Ironic, witty, deeply vested in his family, surprisingly tender and domestic, but also iconoclastic, Ned grew up to be very much a Dickinson. His letters to his family are, as he frequently signed himself, “prodigal.” He clearly enjoyed playing the role of the bad, but intelligent, boy preferring his pipe and Emerson to church. But when his mother was away from home, the letters he sent her were full of domestic details, as he oversaw spring cleaning or took it upon himself to hire new servants.

His father’s affair with Mabel Loomis Todd hit Ned hard, in part perhaps because he had been smitten with Mrs. Todd himself, but more because of the enormous pain it caused his mother, and he strongly took her side. He confided to his sister Mattie: “My only ambition in life Dear Mopsy, is to have a quiet, pleasant little house somewhere – with you and Mother in it where things can be pleasant – no fame, no brains, no family, no scholarship, no anything amounts to anything beside that” (Longsworth, 202).

Ned became an assistant librarian at Amherst College, which did indeed permit him some space for brains and scholarship if not for fame. An undated notebook produced by Ned sometime in the late 1880s contains copies of poems by his mother and his aunt, as well as some passages from Tennyson. It is unclear whether this was intended as a personal commonplace book, or whether he understood this transcription work as a first step toward more formal publication. Interestingly, a number of his transcriptions are clearly based on fascicle versions of the poems rather than on the versions Dickinson had sent to the family.

In 1890 Austin’s lover Mabel Loomis Todd published the first edition of Dickinson’s poems, exacerbating Susan and her children’s sense of betrayal. In August 1895 Austin Dickinson died, and less than two years later Ned accompanied his mother and sister on a tour of Europe. Upon his return he became engaged to Alice (Alix) Hill. Yet for Ned this period proved far more stressful than happy as the rancor produced by Austin and Mabel’s relationship entered its most public stage in a law suit between the Dickinson and Todd families. In May 1898, just two weeks after the verdict against Todd, Ned died of angina; he was just thirty-six years old.