“I hope you may live till I am asleep in my personal Grave . . . I would not like to outlive the smile on your guileless Face.” 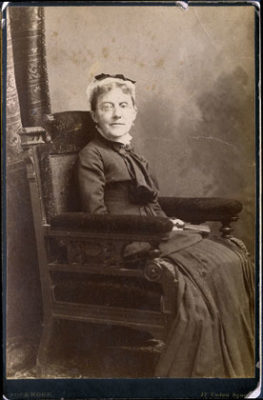 Emily Dickinson’s friendship with Elizabeth Holland came at a turning point in the poet’s life. The two met in Amherst in 1853 through Mrs. Holland’s husband, Josiah Holland, an editor at the Springfield Republican: “Dr Holland and his wife, spent last Friday with us—came unexpectedly—we had a charming time, and have promised to visit them after Commencement” (L132).

In the early 1850s Dickinson’s social life was changing considerably. Good childhood girlfriends married or moved away, and even her brother, Austin, seemed more distant as he completed his law studies and began a drawn-out courtship with one of her closest friends, Susan Gilbert. A friendship with a slightly older woman, already married with an established household, must have been a welcome one.

Elizabeth Chapin Holland was born in Springfield and educated in Albany, New York. She married Josiah Holland, a newly minted physician who later turned his attention to writing, in 1845. They lived briefly in Virginia and Mississippi before returning to Springfield, where Dr. Holland quickly became indispensable at the Republican. They later moved to New York when he took over editorship of Scribner’s. Mrs. Holland’s granddaughter, Theodora Van Wagenen Ward (who helped to edit Emily Dickinson’s poems and letters in the 1950s), described her as “a good and thrifty housekeeper [who] shared her home with Dr. Holland’s widowed mother and her own younger sister, took care of her [three children], and was her husband’s best adviser on important decisions” (Emily Dickinson’s Letters to Dr. and Mrs. Josiah Gilbert Holland, p. 18).

The friendship between Elizabeth Holland and Emily Dickinson—communicated primarily through correspondence as well as occasional visits—was unlike many of the poet’s other relationships: “no flavor of crisis, no sudden intensity of feeling or purpose only to diminish decorously over the years” (Sewall, p. 594). Dickinson’s more than ninety letters to the Hollands, written between 1853 and 1886, share the details of life that one would impart to a close family member: the status of the garden, the health and activities of members of the household, references to recently-read books. Indeed, by 1859 Dickinson addressed Mrs. Holland as “Sister” (L 204).

Although she occasionally sent Mrs. Holland poems, Dickinson does not seem to have considered Mrs. Holland a confidante for that aspect of her life. Instead, the two exchanged plants—“Yours was my first arbutus. It was a rosy boast. I will send you the first witch hazel” (L 318)—and shared a love of sweets. After receiving a gift of confections, Dickinson thanked the “Chocolate Sister”: “The Bonbons were delightful, but better than Bonbons was the love—for that is the basis of Bonbons” (L555). With Mrs. Holland the poet shared her famous gingerbread recipe: “I am pleased the Gingerbread triumphed” (L369). Dickinson also turned to Mrs. Holland for help with deeply personal issues, such as embarrassment over a social faux pas (see L202) or concerns of spiritual matters.

For Dickinson biographers, the details contained within the Holland letters help to reconstruct everyday aspects of the poet’s life. For Dickinson, the friendship with Mrs. Holland provided stability and reassurance throughout her adult years.