“To have had a Mother—how mighty!” 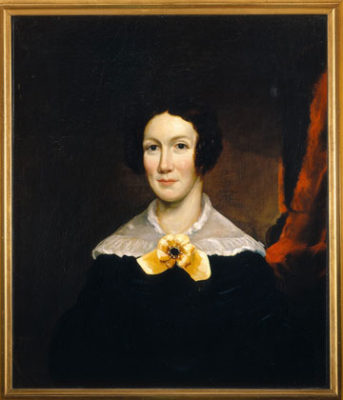 Emily Norcross Dickinson was born in Monson, Massachusetts, on July 3, 1804, to Betsy Fay and Joel Norcross. The eldest daughter of nine children, Emily Norcross had an extraordinary education for a young woman in the early nineteenth century. From age seven to nineteen, she attended co-educational Monson Academy, which her father had helped to found.  She then went to a New Haven, Connecticut, boarding school for one term.

In 1826 Emily Norcross began a courtship with Edward Dickinson. Unlike her future husband or her daughter the poet, Emily Norcross Dickinson had little interest in writing. Edward sent her seventy letters and she responded with only twenty-four extant replies. When her fiancé inquired about her lack of writing Emily stated, “I am sensible that I have never exercised that freedom [of expression] which I presume you have desired me to” (Pollak, p. 56).

After a two-year courtship the couple married on May 6, 1828. Eleven months later Emily Norcross Dickinson gave birth to their first child, William Austin Dickinson. In the fall of 1830 the Dickinsons moved into the Homestead in Amherst where Emily gave birth to their two daughters: Emily in 1830 and Lavinia (Vinnie) in 1833.

Emily Norcross Dickinson kept an immaculate house and was praised for her cooking. She appears to have had little interest in family conversations on politics, history and literature (though she was capable) but instead focused on housekeeping and gardening. She particularly loved roses of all varieties and was also known for her figs, a difficult fruit to grow in the western Massachusetts climate.

Although she suffered one severe bout of depression after the family moved back to the Homestead in 1855, Emily Norcross Dickinson was in good physical health and outlived most of her siblings. Almost a year to the day after her husband’s death in 1874, Mrs. Dickinson had a stroke that left her paralyzed. For the next seven years, until her death on November 14, 1882, her daughters took care of their mother. Later the poet wrote of her mother: “When we were Children and she journeyed, she always brought us something. Now, would she bring us but herself, what an only Gift” (L792).