“That without suspecting it you should send me the preferred flower of life, seems almost supernatural.” 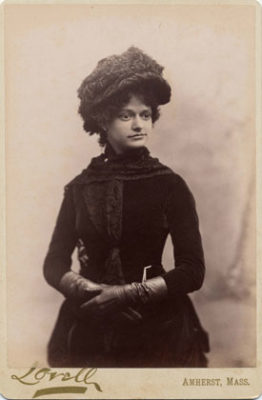 Mabel Loomis Todd, around the time of her arrival in Amherst

Born November 10, 1856, Mabel Loomis Todd was the only child of Eben J. and Mary Wilder Loomis of Washington, D.C. Her father, a clerk in the Nautical Almanac Office, was an amateur naturalist and poet. A pretty, vivacious, talented young woman, she attended Georgetown Female Seminary, then studied piano and voice at the New England Conservatory of Music in Boston. She cultivated, as well, her talents for flower-painting and writing, and had had stories published by the time of her marriage in 1876 to astronomer David Todd.

In September 1881, the Todds moved to Amherst, Massachusetts, so that David could take the new professorship of astronomy at Amherst College. Mabel Todd wrote her parents of a Miss Dickinson who wrote poetry and lived such a secluded life she was called by some in town “the myth.” Todd soon became friends with the poet’s sister-in-law Susan Dickinson and was invited by the poet’s siblings, Austin and Lavinia Dickinson, to play the piano and sing for their reclusive sister and invalid mother. Over the next four and a half years Todd often performed music in the Homestead, becoming acquainted with the poet by way of exchanged notes and occasional conversations between rooms, yet never saw her face to face.

Nearly two years after Emily Dickinson’s death, Lavinia brought to Todd a portion of her sister’s recently-found poems and begged the younger woman to get them published. By that time Mabel was well into a thirteen-year clandestine love affair with Austin Dickinson, an intimacy that had alienated her from Susan, Austin’s wife. Lavinia had first asked Sue to publish the poems, but, impatient with Sue’s slow progress, Lavinia retrieved the manuscripts and brought them secretly to Mabel.

Despite initial reluctance, Todd spent the next nine years ordering, transcribing, and editing hundreds of poems into three volumes of Poems by Emily Dickinson published in 1890, 1891, and 1896 respectively. Todd enlisted the help of Thomas Wentworth Higginson in the selection process, the two making changes in punctuation and some rhymes, and adding titles, attempting to shape Emily Dickinson’s unusual verse forms to the tastes of late 19th-century readers. Both also worked assiduously to herald and promote the volumes. With Lavinia’s help, Todd rounded up Dickinson’s vast correspondence with friends for a two-volume Letters of Emily Dickinson, published in 1894. She gave lectures about the mysterious poet of Amherst, thus influencing the public’s initial image of Dickinson.

After Austin’s death in 1895, tensions between the Todds and Dickinsons led to a March 1898 lawsuit over a piece of land, fueled by long-standing jealousies, fears, and vindictiveness on both sides. When Mabel lost the suit, she angrily locked away a mass of unpublished poems and Dickinson family papers still in her possession. For fifteen years she enjoyed a lecture career that took her all over the northeast United States speaking on some three dozen topics. She accompanied her husband on eclipse expeditions around the world and locally was instrumental in founding the Amherst Historical Society, the Amherst Woman’s Club, and the Amherst chapter of the Daughters of the American Revolution.

A stroke in 1913 ended Todd’s writing and lecturing. The Todds moved to Florida soon afterwards, but in 1931 Mrs. Todd was goaded by Martha Bianchi’s publications of her Aunt Emily’s materials to reissue, with her daughter Millicent Todd Bingham’s help, an enlarged version of the earlier Letters of Emily Dickinson. Other materials in Todd’s possession were later published by Bingham following her mother’s death from stroke in October 1932. Bingham subsequently gave Amherst College the Dickinson poems and letters in her family’s possession.