“I cannot tell when I first became aware that she [Emily Dickinson] had elected her own way of life. To us she had always been as fixed in her orbit as any other star. We had been born into her life. It never seemed to us that it should have been any other than it was.” 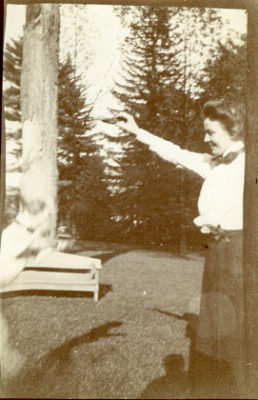 Martha Gilbert Dickinson Bianchi, or Mattie, was born on November 30, 1866, the only daughter of Austin and Susan Dickinson. After her two brothers’ early deaths and the deaths of her parents, she became the last surviving member of the Dickinson line.

Martha studied at three private schools–Miss Howland’s (1879-1880), Miss Marsh’s (1882-1883), and Miss Porter’s (1884-1885)–and had tutors from Amherst College. Before heading off to school in 1884, Mattie received a note of advice from her aunt Emily: “Be true to yourself, Mattie, and ‘Honor and Immortality’—although the first will do—the last is only inferential” (L942). An excellent pianist, Martha studied at the Smith College School of Music (1885-1889) and took private lessons in New York City.

In 1902 while abroad in Bohemia, Martha married the romantic Alexander Bianchi, a captain in the Russian Imperial Horse Guards. He was later jailed on charges of fraud, and the couple separated in 1908, divorcing in 1920.

In her early thirties, Bianchi began writing poetry. Her work appeared in numerous publications, including Harper’s and The Atlantic Monthly. She also wrote several novels, including The Cuckoo’s Nest (1909), A Cossack Lover (1911) and The Kiss of Apollo (1915).

Bianchi, however, is best known for her work editing her aunt’s poetry. After her mother Susan and her aunt Lavinia died, Bianchi inherited the Dickinson manuscripts that remained in her family (the other significant portion of the manuscripts was held by Mabel Loomis Todd). In 1914 Bianchi published The Single Hound: Poems of Emily Dickinson, which helped revive interest in her aunt’s work. She published several more books of Dickinson’s poetry and letters as well her own reminiscences about her aunt. Bianchi and her secretary, Alfred Leete Hampson, like editors before them, edited Dickinson’s poetry with the intent of making it easier to read by removing dashes and changing line breaks. Some of Bianchi’s collections of Dickinson’s poems may still be found at bookstores today.

Bianchi traveled extensively to European destinations, and eventually divided her time between The Evergreens in the summer and New York City in the winter. She died in New York City in 1943.

After her mother’s death in 1913, Bianchi made few physical alterations to The Evergreens. In her will, she bequeathed the house to Hampson, who later married a mutual friend, Mary Landis. Bianchi’s will stipulated that, should Hampson and his family ever choose not to live in the house, The Evergreens should be torn down rather than sold to another owner. Mary Landis Hampson, the last resident and owner of The Evergreens, made arrangements in her own will to establish the Martha Dickinson Bianchi Trust to preserve the house for public use. In 2003, the Martha Dickinson Bianchi Trust transferred its assets to the Trustees of Amherst College so that The Evergreens and the Homestead could operate as a single Emily Dickinson Museum.