“a creator of endless perspectives” 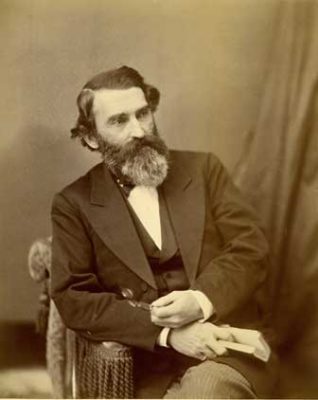 Samuel Bowles was the owner and editor-in-chief of the Springfield Republican, New England’s most influential newspaper of the day. Under Bowles’s direction, the paper became one of the country’s “most progressive and influential” newspapers (Habegger, p. 377). Progressive in his own politics, he helped to establish the Republican party, supported the antislavery movement, and advocated for social reform on a number of fronts.

Susan Dickinson remembered Bowles as “the first guest in our newly married home” (Annals,” p. 2). That visit to The Evergreens, made during a trip to Amherst to observe demonstrations of agricultural machinery, led to a lifelong friendship with Austin and Susan Dickinson. Susan recalled that Bowles’s visits to The Evergreens rarely ended until after midnight: “His range of topics was unlimited, now some plot of local politics, rousing his honest rage, now some rare effusion of fine sentiment over an unpublished poem which he would draw from his pocket, having received it in advance from the fascinated editor” (“Annals,” p. 3). His presence in The Evergreens “seemed to enrich and widen all life for us, a creator of endless perspectives” (“Annals,” p. 2). For Bowles, who suffered from bouts of ill health, visits to The Evergreens provided a respite from his busy life as an influential editor with close ties to politicians in Washington.

Emily Dickinson’s friendship with Bowles began on a good note. She wrote to Bowles shortly after meeting him at The Evergreens: “Though it is almost nine o’clock, the skies are gay and yellow, and there’s a purple craft or so, in which a friend could sail. Tonight looks like ‘Jerusalem.’ I think Jerusalem must be like Sue’s Drawing Room, when we are talking and laughing there, and you and Mrs Bowles are by” (L189). About fifty letters to Bowles (some also written to his wife, Mary) survive, with the majority written during 1861 and 1862, a particularly difficult time for Dickinson.

Bowles was one of the primary recipients of Dickinson’s poems—about 40 in all. Several of the poems, written in the early 1860s, allude to the turmoil she was experiencing during that time but do not disclose its specific nature. After the text of her poem “Title divine—is mine! / The Wife without the sign,” she wrote to Bowles: “Here’s – what I had to ‘tell you’ – You will tell no other? Honor – is it’s [sic] own pawn—” (L 250; Fr 194). Although scholars generally agree that Dickinson’s relationship with Bowles was one of the most significant in her life, interpretations of the nature of their friendship vary. While some feel he is a primary candidate for the Master figure, others argue he was simply a close friend whom she trusted enough to share her deepest troubles.

Although Bowles remained good friends with Austin and Susan, Emily and Bowles may have endured a long breach that was finally repaired when Edward Dickinson died in 1874. Bowles was the only person outside of the family to speak with the now reclusive poet at the funeral, and he sent flowers to the family each year on the anniversary of Edward’s death.

When Samuel Bowles himself died early in 1878, Dickinson wrote to his widow: “Dear ‘Mr. Sam’ is very near, these midwinter days. When purples come on Pelham, in the afternoon we say ‘Mr. Bowles’s colors'” (L 536). His loss, like that of Dickinson’s father, was one of a number that the poet endured with great sadness in her own final years.

Despite Bowles’s prominent position at the Republican, none of the poems that he is known to have received from Dickinson are among the seven published in the Republican during her lifetime. It remains unknown how those poems made their way to the paper.