“With the exception of Shakespeare, you have told me of more knowledge than any one living. To say that sincerely is strange praise” 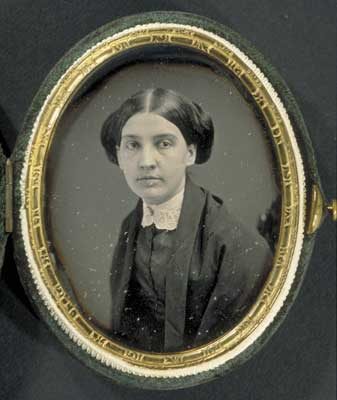 Susan Huntington Gilbert was born on December 19, 1830, in Deerfield, Massachusetts, the youngest of seven children of Thomas and Harriet Arms Gilbert. After the death of her mother in 1835, she was raised with her sisters in Geneva, New York, by her aunt Sophia van Vranken. As a girl of sixteen she visited Amherst, where her eldest sister resided, and attended Amherst Academy during the summer of 1847. Thereafter she attended Utica Female Academy in New York through 1848, then returned to Amherst for the rest of her life. Susan was a vivacious, intelligent, and cultivated woman, a great reader, a sparkling conversationalist, and a book collector of wide-ranging interests. Late in life she traveled in Europe several times before her death from heart disease on May 12, 1913.

In 1850, Susan and Austin Dickinson, the poet’s brother, began courting. They announced their engagement on Thanksgiving Day in 1853 and were married three years later on July 1, 1856. At their newly-built home, The Evergreens, next door to the Homestead, Susan enjoyed entertaining friends and the numerous literary figures attracted to the town, such as Ralph Waldo Emerson and Harriet Beecher Stowe. In the early years of Austin and Susan’s marriage, Emily Dickinson would often visit The Evergreens and enjoy the company she found there. Susan and Austin had three children: Edward (“Ned”), born in 1861; Martha, born in 1866; and Thomas Gilbert (“Gib”), born in 1875.

The Evergreens was the setting for two family tragedies. After a time, Austin and Susan’s marriage gradually deteriorated, and in the fall of 1882 Austin began a thirteen-year affair with Mabel Loomis Todd that caused great rancor and bitterness within the family. Then, in the fall of 1883, eight-year-old Gib, beloved of all the family, died of typhoid fever. The child’s death crippled both houses, leaving Susan desolated and the poet ill for weeks.

Susan had become close friends with Emily Dickinson in 1850. Their intimate correspondence, occasionally interrupted by periods of seeming estrangement, nevertheless lasted until the poet’s death in 1886. Susan, a writer herself, was the most familiar of all the family members with Dickinson’s poetry, having received more than 250 poems from her over the years. At least once she offered constructive criticism and advice. Susan wrote the poet’s remarkable obituary, which appeared in the Springfield Republican on May 18, 1886. After the poet’s death, her sister Lavinia asked Susan to edit the poems for publication. Lavinia soon grew impatient with Susan’s slow editorial pace, however, and transferred the poems into the hands of Mabel Loomis Todd, who published three volumes during the 1890s with the aid of Thomas Wentworth Higginson.

Susan’s friendship helped expand the poet’s horizons, and their sharing of books and ideas was a vital component of her intellectual life. In her later days, Emily Dickinson wrote to Susan, “With the exception of Shakespeare, you have told me of more knowledge than any one living. To say that sincerely is strange praise” (L757).