Memoirs of Little Boys that live—
“Weren’t you chasing Pussy,” said Vinnie to Gilbert?
“No—she was chasing herself”—
“But wasn’t she running pretty fast”? “Well, some slow and some fast” said the beguiling Villain—Pussy’s Nemesis quailed—
Talk of “hoary Reprobates”!
Your Urchin is more antique in wiles than the Egyptian Sphinx— 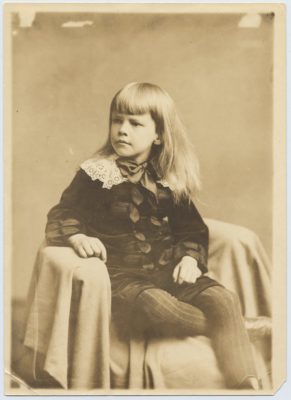 Thomas Gilbert Dickinson, Emily Dickinson’s second nephew, was born on August 1, 1875. Susan and Austin Dickinson had been married for almost twenty years when their third child was born; their eldest Ned was already fourteen and daughter Mattie, eight, by then. The whole family doted on “little Gib.” Many of Ned’s letters, for example, describe the antics of his little brother with clear pride and affection: “Gib is all right and as naughty as ever,” he declares in a letter to their mother (Jan 11, 1879). “Gilbert has a most tremendous reputation for brilliant remarks out here,” he boasts in another (Oct 10, 1881). Emily Dickinson’s letters suggest that she, too, took great pleasure in her youngest nephew’s beguiling wiles.

A number of Gib’s own letters remain, confirming this charming precociousness. A letter he wrote to “Santy Clause” and posted with a hand-drawn stamp concludes: “Please bring me whatever you think best. I don’t mean a spanking I mean some common place toys.” In fact the Evergreens contains a far-from-commonplace collection of his toys, including an elaborate rocking horse and a velocipede (tricycle), which Gib rode avidly in town. The furnishings of the Dickinson nursery display the Victorian era celebration of childhood as a special and cherished life stage, the Dickinsons going so far as to allow their children to paste pictures from books and magazines on the doors of the nursery and adjacent hall. When Gib decided to host a circus in The Evergreens’ yard, the family printed up abundant tickets.

In the fall of 1883 Gib contracted typhoid fever, and died on October 5. He was just eight years old. In a rare excursion from the Homestead, Emily Dickinson came to sit by his bedside the night before he died, and her letter of condolence to Sue is seared with her grief. “His life was full of Boon” she wrote. “I see him in the Star, and meet his sweet velocity in everything that flies—His life was like the Bugle, which winds itself away, his Elegy an echo—his Requiem ecstasy—” (L868). Her own health deteriorated swiftly thereafter, and some scholars have associated her decline with the wrenching loss of this beloved boy. The family as a whole was deeply shaken by his death. No other children ever lived in The Evergreens and the nursery was largely preserved intact as a kind of family memorial.

Kirk, Connie Ann. “‘Open the Door, They Are Waiting for Me’: An Introduction to The Evergreens Nursery.”Emily Dickinson International Society Bulletin (16:1), May/June 2004. 4-6.