“There was always such a Hurrah wherever you was” 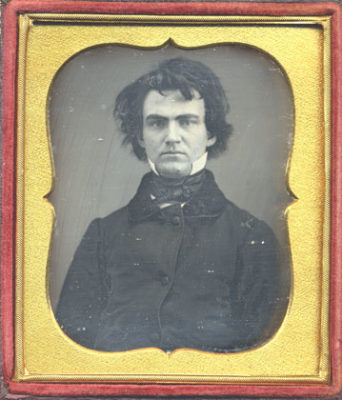 The world of the close-knit Dickinson family revolved around Austin. The oldest of the three Dickinson children, William Austin Dickinson was born on April 16, 1829, about a year and half before his sister Emily. Educated at Amherst Academy and at Williston Seminary in Easthampton, Massachusetts, Austin graduated from Amherst College with the class of 1850. After a short-lived career as a teacher, Austin turned his full attention to law, the profession that both grandfather Fowler and father Edward pursued.

Upon graduation from Harvard Law School and in anticipation of a new life with his fiancée, Susan Gilbert, Austin considered a move west, to Chicago. Edward’s offer to make his son a partner in his Amherst law firm and to build a house (The Evergreens) for Austin and Susan changed such plans. Like the other members of his family, Austin remained an Amherst resident until the end of his life.

Austin’s law practice, his home and family (he and Susan had three children), numerous civic obligations, a fascination with landscape architecture, and a “passion” for pictures, particularly landscape paintings, consumed him. He succeeded his father as treasurer of Amherst College in 1873; served as Town Moderator from 1881 until his death in 1895; was president of Amherst’s Village Improvement Society; and was a founder of Wildwood Cemetery, the town’s private cemetery (where he and his family are buried). Through his activities he befriended numerous notables, including the landscape architects Frederick Law Olmsted and Calvert Vaux and newspaper editor Samuel Bowles. A friend once told him: “I suppose nobody in the town could be born or married or buried, or make an investment, or buy a house-lot, or a cemetery-lot, or sell a newspaper, or build a house, or choose a profession, without you close at hand” (Longsworth, p. 117).

Emily Dickinson was especially close to her brother in their youth. Her letters to him when he was away from home reveal their shared interests in intellectual pursuits, nature, and local affairs, as well as Emily’s—indeed the entire household’s—deep affection for him: “Our apples are ripening fast—I am fully convinced that with your approbation they will not only pick themselves, but arrange one another in baskets, and present themselves to be eaten” (L48).

After Austin settled into The Evergreens, his relationship with Emily changed. With his attention pulled in other directions, he had less time for sisterly concerns. Once, when Austin stayed at the Homestead while his wife and children were out of town, Emily noted: “It seemed peculiar—pathetic—and Antediluvian. We missed him while he was with us and missed him when he was gone” (L432). Yet Austin did care for his sisters, especially after their parents’ deaths, and he was by Emily’s side when she died.

Austin’s personal life was complicated. Despite the joy that their children brought to the household, Susan and Austin did not maintain that joy in their own relationship. In 1882 Austin met Mabel Loomis Todd, an accomplished young woman twenty-seven years his junior and the wife of an Amherst College astronomy professor. The two fell in love and were involved in a deeply committed relationship for almost thirteen years, although each remained married and the affair was known to their spouses.

While Austin was not directly involved in the posthumous editing of his sister’s poetry, his affair with Todd, who served as a principal editor of Dickinson’s work, created additional tensions with his wife and surviving sister. Austin died from heart failure on August 16, 1895. He was 66.