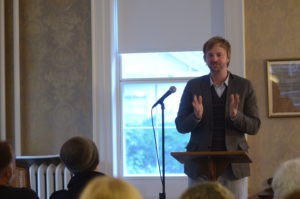 On first Thursdays of each month, see a pop-up art exhibition in the Homestead, participate in an open mic in Emily Dickinson’s parlor, and listen to featured readers share their written work.

The Emily Dickinson Museum participates in Amherst Arts Night Plus on first Thursdays each month. Free and open to all! Each month, enjoy the following:

Wyn Cooper has published five book of poems, most recently Mars Poetica. His work has appeared in Poetry, Ploughshares, Slate, and more than 100 other magazines as well as in 25 anthologies of contemporary poetry. His poems have been turned into songs by Sheryl Crow, David Broza, and Madison Smartt Bell. He has taught and given readings throughout the United States as well as in Europe. He lives in Boston and works as a freelance editor.

Posted in Past Events and tagged event.