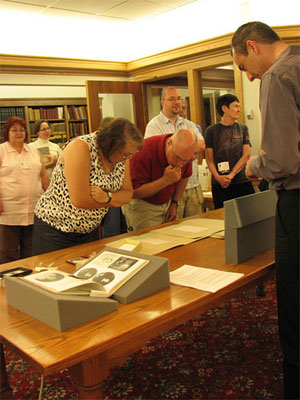 The special collections in the Amherst College archives

The Emily Dickinson Museum welcomes inquiries from researchers and strives to support their work. This page includes information about resources at the Museum and other Dickinson-related sites as well as information about copyright issues with Dickinson’s work, a selected bibliography, and a list of electronic resources.

Research at the Museum can be useful not only to Dickinson scholars but also to researchers interested in nineteenth-century material culture, social and cultural trends, domestic life, architecture, and decorative arts.

Researchers wishing to use the collections of the Emily Dickinson Museum should contact the executive director at jhwald@emilydickinsonmuseum.org or 413-542-2154.

The Museum does not own Dickinson manuscripts or family papers but works closely with the institutions that do. The two major repositories for Emily Dickinson’s manuscripts and family papers are Amherst College and Harvard University:

Amherst College Archives and Special Collections, Amherst, Massachusetts.
The Dickinson collection documents the creative work and personal life of Emily Dickinson, spanning her lifetime, from 1830 to 1886; her family and friends; and the early publication history of her work. It also includes material from Dickinson scholars Mabel Loomis Todd, Millicent Todd Bingham, Jay Leyda, and others. The collection includes original poems, manuscripts, and letters from Dickinson to family and friends; images of the poet, including the daguerreotype and silhouette; physical artifacts related to Dickinson; manuscript transcriptions; printers’ copies and proofs; Mabel Loomis Todd’s correspondence, research indices, and writings; and material from or about Dickinson’s friends and family, including correspondence, photographs, objects, and scrapbooks.  The collection began with a gift from Millicent Todd Bingham of the Dickinson manuscripts in the possession of her mother, Mabel Loomis Todd.

Houghton Library, Harvard University, Cambridge, Massachusetts.
The Dickinson Collection began at Harvard in 1950, the gift of Gilbert H. Montague “in happy memory” of his wife, Amy Angell Collier Montague. Montague, a distant cousin of the Dickinsons, purchased the collection from Alfred Hampson, who inherited it from Martha Dickinson Bianchi, the poet’s niece. Hampson was eager that the manuscripts be available for research at a major university, and Montague knew his alma mater would provide the proper environment to nurture the reputation of Emily Dickinson. The collection includes most of Emily Dickinson’s fascicles and a large collection of family letters as well as family photographs, books, and personal items.

The Emily Dickinson Room, where most of the Dickinson books, as well as furniture and other objects from the Dickinson family, are on display is shown to visitors on Fridays at 2:00 pm and at other times by appointment.

Other libraries with significant Dickinson-related holdings include:

Jones Library, Amherst, Massachusetts.
This Dickinson collection places the poet within the context of her community in Amherst, Massachusetts, during the mid-nineteenth century. The collection consists of approximately 7,000 items, including original manuscript poems and letters, Dickinson editions and translations, family correspondence, scholarly articles and books, newspaper clippings, theses, plays, photographs, and contemporary artwork and prints. The Jones Library also maintains Digital Amherst, a site prepared for the Town of Amherst’s 250th anniversary that celebrates the town through images, multimedia and documents.

Mount Holyoke College Archives and Special Collections, South Hadley, Massachusetts.
The Emily Dickinson Collection chiefly consists of newspaper clippings, articles, books and published and unpublished papers concerning Dickinson’s life and work. Also includes a letter that she wrote while a student at Mount Holyoke Female Seminary (1847-1848), collections of her poems, and documents relating to the Emily Dickinson International Society, a postage stamp issued in her honor, and films, music, novels, plays and poems about her.

Boston Public Library, Boston, Massachusetts.
The Rare Books and Manuscripts Collections includes Dickinson’s correspondence with Thomas Wentworth Higginson, her mentor and one of her posthumous editors.

In addition to links cited above in Dickinson Manuscripts and Related Collections, the electronic resources listed below are useful in pursuing Dickinson interests.

Below is a selected list of editions of Dickinson’s poems and letters, biographies, and key reference works. For additional bibliographies, see Selected works related to the Homestead and The Evergreens below.

Selected works related to the Homestead and The Evergreens