THE EMILY DICKINSON MUSEUM RECEIVES A $22 MILLION GIFT AS PART OF A $25 MILLION BEQUEST TO AMHERST COLLEGE FROM THE LATE WILLIAM MCC. VICKERY ‘57

The Endowed Gift, the Largest Ever Received by the Museum, is to be Used for the Maintenance and Improvement of Its Buildings, Grounds and Collections 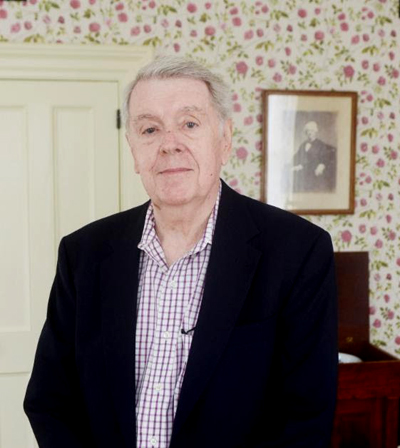 (AMHERST, Mass., June 5, 2019) — Amherst College today announced a gift of approximately $25 million from the late William McC. Vickery ’57 to the College’s endowment, approximately $22 million of which is designated for use by the Emily Dickinson Museum in Amherst, Mass. The transformative gift, the largest ever received by the museum, will be known as the “William McCall Vickery ’57 Emily Dickinson Fund” and is specifically earmarked for the maintenance and improvement of its buildings, grounds and collections. Vickery, who was a devoted Amherst alumnus, volunteer, employee and supporter, also was a founding member of the Dickinson Museum’s board of governors.

The Emily Dickinson Museum was founded in 2003 when the neighboring house, The Evergreens, a 19th-century Dickinson home, was transferred to the College. (The Dickinson Homestead has been owned by the College since 1965.). Today, the Museum includes those two historic structures, three acres of the original Dickinson landscape, and more than 7,000 objects. The Museum, a part of Amherst College, earns and raises independently the majority of its own resources.

Of Vickery’s gift, Amherst College President Biddy Martin said, “There was no aspect of Amherst’s mission that did not interest him, no area of the College that did not benefit from his energetic, wry, and deeply insightful engagement. His gift to the Emily Dickinson Museum is a gift to us all and to generations to come, as is his gift to the College’s Department of Music. Bill understood and he helped ensure that the poetry and music that were special to him will remain at the heart of Amherst.”

A pivotal figure in the Museum’s advancement over the last 16 years, “Bill Vickery truly cherished the Emily Dickinson Museum,” said Executive Director Jane Wald. “He was acutely aware of the importance—and possibility—of restoring Emily Dickinson’s Homestead, her brother’s house, The Evergreens, and the historic gardens and grounds. He was at the lead in every undertaking for the Museum’s improvement, and his quiet enthusiasm was infectious and never deterred. His transformative gift will enable the Museum to become the true center of celebration of Emily Dickinson’s life and work.”

Part of the Vickery’s gift will be used to create the “William McCall Vickery ’57 Piano Fund” to fund the restoring, rebuilding, repairing and purchasing of pianos for the College’s music department. A patron of the music program at Amherst, in 2007, in honor of his 50th reunion, Vickery endowed The William McCall Vickery 1957 Professorship, honoring a senior faculty member who is distinguished by and dedicated to teaching and research of art history or musicology.

John Beeson ‘71, chair of the Board of Governors, said, “Bill’s extraordinary legacy gift will inspire others to support a wide range of projects related both to historic preservation and to the continued expansion of key programs about Emily Dickinson’s life and significance. It will require that continued support to help realize the full potential of Bill Vickery’s vision.”

Born in Savannah, Ga., Vickery attended Ridgewood High School in New Jersey. At Amherst College, he majored in economics and graduated cum laude. After earning an MBA from Harvard Business School, he launched a 27-year career in advertising with Dancer Fitzgerald Sample in New York City. In 1987, Vickery retired as vice chair of the company’s board and chair of DFS International. The year following his retirement, Vickery began his “second career” at his alma mater, holding positions in Advancement and as assistant treasurer until his retirement in 2008. Throughout his life, Vickery contributed generously to more than 26 individual funds at Amherst College, including the Russian Culture Fund, the Robert Frost Statue Fund, the squash courts renovation fund, the Orchestra Fund, the women’s basketball program, and the Choral Society, and he endowed the William McCall Vickery 1957 Professor of the History of Art.

Throughout the years, Vickery’s philanthropy set an example and inspired others to support the Emily Dickinson Museum. He served on its collections and physical plant committee and development committee and was a generous supporter of the Museum’s operations and restoration projects, including the campaign to restore Emily Dickinson’s bedroom in 2014, which Vickery led and championed.

“My husband, Hubbard, and I shared a wonderful friendship with Bill for most of our lives,” said Linda Smith, a member of the Museum’s Board of Governors. “He led us and many others into supporting the Emily Dickinson Museum in so many ways. He believed in the truth and enduring nature of Dickinson’s poetry, and he demonstrated his commitment to the Museum’s future over and over again by his extraordinary generosity.”

Since its inception, the Museum has welcomed more than 150,000 visitors from 50 countries and serves as the premier center for study, interpretation, and celebration of Emily Dickinson’s place in literature, history, and culture. This generous gift will support the Museum in furthering its mission to spark the imagination by amplifying Dickinson’s revolutionary poetic voice from the place she called home. The Museum is open Wednesday through Sunday, 11 a.m. to 4 p.m. Learn more at www.EmilyDickinsonMuseum.org.

Amherst College prepares students to use ideas to make a difference in the world. Since its founding, in 1821, in Western Massachusetts, Amherst has demonstrated steadfast confidence in the value of the liberal arts and the importance of critical thinking. Today, its financial aid program is among the most substantial in the nation, and its student body is among the most diverse. Small classes, an open curriculum and a singular focus on undergraduate education ensure that leading scholars engage daily with talented, curious students, equipping them for leadership in an increasingly global and complex world. The College will celebrate its bicentennial in 2021.