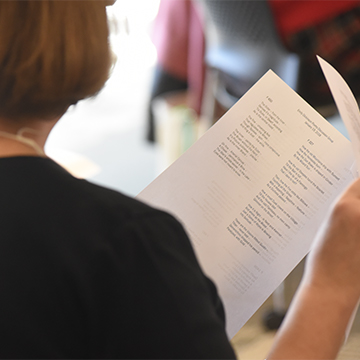 The Emily Dickinson Museum’s Poetry Discussion Group meets monthly, September through May, for lively conversation about Emily Dickinson’s poetry and letters. Each session is facilitated by a guest leader.
Join us for a remote zoom discussion from 12pm to 1:30pm on Friday, May 22.

Topic: Emily Dickinson and the Mind

Poetry, for Emily Dickinson, is invested with inconceivable possibilities of signification. She reveled in the ecstatic “Madness” of meanings, since, to her, “Much Madness is divinest Sense.”Her forte is to transform the material to the metaphorical, and to question the notion of ‘reality’ as it is conventionally understood.

This session will feature Dickinson and philosophy, spanning her mental philosophy textbooks to parallels between her poetry and the writings of philosopher Immanuel Kant. Dickinson was, like Kant, intrigued with the relation between subject and object, and fascinated with the ‘transcendent’—that goes beyond the boundaries of empirical evidence. Together we will delve into Dickinson’s writing in a way that will allow us to critically appreciate the transcendental depth and autonomy of the poet’s mind.

Leader: Mousumi Banerjee
Dr. Mousumi Banerjee is an engaged practitioner of the language and its varied manifestations in literature with a flair for research in poetry, the multiple hermeneutic possibilities of which caused her to look at women’s writing and authorial anxiety in her doctoral study that she pursued from Jadavpur University. The voices of women poets from those intellectual edges, that are hitherto identified as the ‘margins’ of literary writing, became the site of her inquiry which led her to publish considerably on the works of supposedly non-canonical women writers. Philosophical writings also enchant her and she looks forward to working on the textuality of such works by various Western thinkers across traditions of thought and practice. She is a passionate teacher in literature and contemporary theory, singer and music enthusiast, and loves to engage in deliberations on other humanistic discourses, in general, and on Emily Dickinson, in particular! She has authored books, named Writing across Genres: Indian Literature, Language and Culture (2015), Daring to Write: The Two Creative Daughters of Victorian England (2015), and Emily Dickinson: Writing as a Woman (2017), and currently has two on-going book-length projects: one on Gitanjali: An Exalted Manifestation of Buddhist Aesthetics, and the other on ‘A thought went up my mind today –’: An Inquiry into a Post-Kantian Transcendental Philosophy in Emily Dickinson’s Poetry. She has been awarded with the Fulbright-Nehru Postdoctoral Research Fellowship 2019-2020 by the United States- India Education Foundation (USIEF) to pursue her postdoctoral research, and presently she is associated with Amherst College for her work on the book on Dickinson. She greatly appreciates the continuous effort of the Emily Dickinson Museum not only in keeping the memory of the poet alive, but also in encouraging thought and scholarship on the poet’s spectacular poetic oeuvre so as to deeply influence our own lives.
Registration for this event is now closed. If you have registered, we will email you by Monday, May 18 with a link and more information. Thank you for your interest in this program. If you were not able to join us this time, we hope to see you when the series resumes in September.