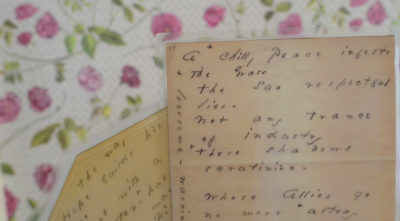 Join us for a lively virtual discussion of Emily Dickinson’s poetry and letters, meeting once a month from February to May. This program is designed to welcome newcomers and seasoned readers of Dickinson alike.

As a registrant, you are signing up to join a small group of regular participants for four 90-minute zoom sessions. Meetings are participatory, with video and audio encouraged. Because we want everyone to feel comfortable speaking, sessions will not be recorded. The program is designed for adult audiences (18+).

We are offering an identical program for a Wednesday and Friday group. Please review the dates carefully. Because space is limited, we hope only those who can commit to attending will register. Refunds are not available for this program.

Reservations are made on a first-come, first-served basis. While our Wednesday group is now closed, we have just a few spaces left in our Friday group. Please learn more about registration and request a space via this form.

Questions: Don’t hesitate to reach out at edmprograms@emilydickinsonmuseum.org with any questions about the program.

Emily Dickinson’s Natural Music
Emily Dickinson knew music well as a performer and a listener in parlors, churches, and other indoor spaces. But she also spent a lot of time outdoors, in the garden, walking her beloved dog Carlo, and exploring Amherst. Like many other writers of her time, Dickison wrote of natural sounds as having musical qualities. Wind, rain, cicadas, and of course birds all show up in her poems as sources of music, and as inspiration for her own distinctive poetic music. We will discuss how poets important to Dickinson wrote about the sounds of the natural world, and how Romantic musical composers and performers built sounds of nature into their work, before exploring together some of Dickinson’s poems that treat natural sounds musically.

Gerard Holmes completed a PhD in English Literature at the University of Maryland, College Park in 2020, with a dissertation titled “‘Discretion in the Interval’: Emily Dickinson’s Musical Performances.” He has published in The Emily Dickinson Journal and Reception, co-edited a 2021 special issue of Women’s Studies with the theme: New Directions in Dickinson and Music,” and contributed a chapter to The Oxford Handbook to Emily Dickinson, forthcoming from Oxford University Press in April 2022. In addition to teaching writing and literature, he is a nonprofit administrator, program manager, and fundraiser.

“…an instant’s act:” Dickinson’s Long-Histories of Environmental Change
This discussion will consider the importance of Dickinson as a poet of the Anthropocene, that proposed geologic epoch in which human activity has rendered irreversible transformations to our global climate and conditions for life on earth.  While Dickinson was certainly not aware of climate change, nor she could have possibly predicted our current ecological precarity, we will explore particular Dickinson poems that focus on geologic time, wide-scale environmental transformations, and human/nonhuman entanglements, as sites to better consider our own individual, communal and species-based relations to contemporary environmental issues.

Ryan Heryford is Associate Professor of Environmental Literature in the Department of English at California State University East Bay, where he teaches courses in nineteenth and twentieth century American literature, with a focus in cultural narratives of environmental justice.  Recent publications can be found in ISLE: Interdisciplinary Studies of Literature and the Environment, The Mark Twain Annual, and The Emily Dickinson Journal.

Emily Dickinson and Her Surprisingly Twenty-First Century Art of Trans Poetics
As those who love her know, Dickinson often writes first-person poems describing states of being that don’t fit socially recognized categories, and which, as a result, have few terms or poetic conventions for expressing them. What kind of person, for example, would introduce themselves by saying “I am afraid to own a Body – / I am afraid to own a Soul,” or locates themselves in terms like these: “`Tis Miracle before Me – then – / `Tis Miracle behind – between”? Poets and scholars (including me) started using the term “trans poetics” – that is, poetic techniques for representing ways of being human that don’t fit conventional terms or categories – a little over a decade ago, to describe the growing body of work by transgender and nonbinary poets. But it didn’t long before critics began to realize that because “trans poetics” are required whenever poets represent unconventional ways of being human, the practice has a much longer lineage in American poetry, one that, as these examples show, reaches back at least to Emily Dickinson. In this discussion, we will examine a number of poems to see what Dickinson, in the middle of the nineteenth century, had already learned about the twenty-first century art of trans poetics.

Joy Ladin, who started leading classes on Dickinson’s poetry in the Homestead itself in the mid-1990s and has loved it every time, has been dubbed “the godmother of trans poetics.” She has published ten books of poetry, including National Jewish Book award-winner The Book of Anna, reissued by EOAGH Press, and just-published Shekhinah Speaks (Selva Oscura). She is also the author of a booklength study of Dickinson, Soldering the Abyss: Emily Dickinson and Modern American Poetry; a a memoir of gender transition, National Jewish Book Award finalist Through the Door of Life; and Lambda Literary and Triangle Award finalist, The Soul of the Stranger: Reading God and Torah from a Transgender Perspective. Episodes of her online conversation series, “Containing Multitudes,” are available at www.jewishlive.org/multitudes; links to her writings, readings, interviews and talks are at her website, joyladin.wordpress.com.