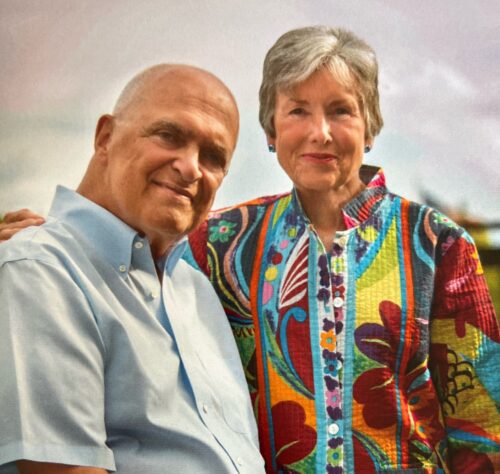 (January 4, 2023, AMHERST, MA) – The Emily Dickinson Museum today announced a gift of $2.5 million from Jane and Robert Keiter to its Twice as Bold campaign for the endowment of the Museum’s directorship. This is the first endowed position at the Emily Dickinson Museum, which reopened to the public in August after a two-year pandemic closure and completion of a major restoration of the poet’s home.

“This gift is another example of the Keiters’ tremendous support of the Emily Dickinson Museum,” said Executive Director Jane Wald, who will be the first to hold the Keiter title. “Jane and Bob have been leaders in several outstanding initiatives at the Museum over the last decade and we are thrilled to be able to honor their ongoing commitment in such a permanent and public way. Their generosity and understanding of the importance of such gifts for the growth and future sustainability of the Museum is tremendous in and of itself and as an example to others.”

The Keiters were introduced to the Emily Dickinson Museum by way of Robert’s alma mater, Amherst College, which owns the Museum, and in particular by his connection to fellow ’57 classmate William Vickery, who was a founding member of the Museum’s Board of Governors and was instrumental in encouraging Robert to serve on the Board as well.

“As the home and creative source of one of this country’s greatest poetic voices, the Emily Dickinson Museum is a national treasure for which we all have a shared responsibility,” said Robert from his home in Lakeville, Connecticut. “Jane and I have thoroughly enjoyed watching the Museum grow and change over the years to better serve and inspire new generations. We are honored to support its bright future.” Flowing from a strategic plan completed in 2019 and taking its name from one of Emily Dickinson’s poems, the Museum’s Twice as Bold campaign prioritizes an expanded, fully restored, and accessible campus; leading-edge educational programs and resources; a singular visitor experience both onsite and online; and increased operational capacity for the Museum’s long-term sustainability. A first step in achieving this bold vision is a goal to raise $8 million for programmatic support and capital projects by 2026.

For more information about the Museum’s plans and fundraising effort, visit:
EmilyDickinsonMuseum.org/TwiceAsBold/

HOW DO ENDOWMENT GIFTS WORK?

Endowment gifts differ from other types of contributions in that the full amount is ‘tucked away’ and permanently invested by the recipient organization, rather than being available to spend outright. Each year, a portion of the investment’s earned interest is released for the gift’s intended purpose. In our case, annual earned interest from the Keiters’ generous gift will help defray the costs and directly support the position and work of the Museum’s Executive Director in perpetuity. In that sense, this and other endowment contributions are truly gifts that keep on giving.

The Emily Dickinson Museum is dedicated to sparking the imagination by amplifying Emily Dickinson’s revolutionary poetic voice from the place she called home.

The Museum comprises two historic houses—the Dickinson Homestead and The Evergreens in the center of Amherst, Mass.—that were home to the poet (1830-1886) and members of her immediate family during the nineteenth and early twentieth centuries. The Museum was created in 2003 when the two houses merged under the ownership of the Trustees of Amherst College. The Museum is overseen by a separate Board of Governors and is responsible for raising its own operating, program, and capital funds.