The Emily Dickinson Homestead embarks on the next phase of historic restoration.
This project will restore more of the National Historic Landmark home of one of America’s greatest poets to its period of historic significance. 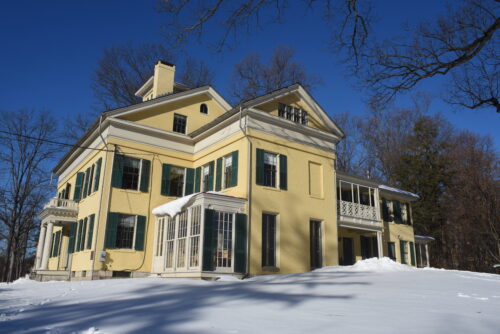 (Amherst, MA, February 17, 2021) – The Emily Dickinson Museum is embarking on the most significant restoration project to date of the interior architectural features, finishes, and furnishings of the revered poet’s Homestead. The project will also address long-term stabilization with the introduction of new environmental regulating systems in both the Homestead, the historic birthplace and home of Emily Dickinson, and The Evergreens, the Italianate home of Emily’s brother Austin and beloved sister-in-law Susan Gilbert. This work is the first step in an ambitious long range vision that aims to establish the Museum as the premier center for the study and celebration of the life and work of Emily Dickinson.

The project launches at a time of renewed and growing interest in Emily Dickinson and the revolutionary poetic voice she honed from her home in Amherst. Hailed recently as the ‘Original Queen of Social Distancing’, Dickinson and her work have been particularly resonant this past year. New interpretations and citations include Apple TV+’s hit series Dickinson, the new Taylor Swift album Evermore, the intimate work of Nobel Prize winner Louise Glück, and the philanthropy of MacKenzie Scott. The Emily Dickinson Museum has also happily found itself at the center of this buzz, attracting thousands of individuals from nearly 70 countries to its Virtual Programs over the past 6 months alone.

Museum Executive Director Jane Wald says, “We’re of course thrilled with the recent wave of interest in Emily Dickinson, and particularly in the home so intimately connected to her work. The Museum is committed to providing visitors with an increasingly authentic experience of the homes and grounds inhabited by the Dickinson family, and this restoration will have a profound impact on that experience. It will not only triple the amount of restored space in the Homestead accessible to guests, but also add critical details to their understanding of Dickinson’s daily life, especially as we introduce exciting new programs and interpretive themes in the coming years as part of our long range plan.”

Wald indicated that the project is able to kick-off earlier than planned in part because of funding made available through the generosity of the late William McC. Vickery–a longtime board member and champion of the Museum–for just such ‘bricks and mortar’ projects, as well as the Board of Governors’ decision to take advantage of the Museum’s extended COVID-related closure. Construction will last through 2021. While closed for restoration, the Museum will continue to actively engage audiences around the world through its schedule of online programs (EmilyDickinsonMuseum.org/events-news).

The Restoration Plan
With funding from the Massachusetts Cultural Facilities Fund, the Emily Dickinson Museum retained Mesick Cohen Wilson Baker Architects to produce a Design Development Report for the original portion of the Homestead built by the poet’s grandfather in 1813. The Museum also retained historic decorative arts consultant Marylou Davis to research, recommend, and, in some cases, reproduce the finishes and decor of the nineteenth-century Homestead. With the completion of work described in these studies, the Homestead will be on its way to being fully restored to its period of mid-nineteenth century historical significance, as Emily Dickinson would have known it.
Previous restoration projects – Emily Dickinson’s bedroom, conservatory, family library, and heirloom orchard – have created for visitors dynamic and personal encounters with the poet’s world available nowhere else. This, in addition to the purchase of adjacent property on Triangle Street to house administrative staff, has begun to allow the Homestead to shed multiple functions and regain its authenticity as Emily Dickinson’s own home and creative space.
Hallways
Investigation of the hallways has yielded fragments of original period-specific wallpaper, which confirm that Emily Dickinson passed through corridors and open halls decorated in a colorful gothic stylized floral pattern. Paint analysis reveals the precise paint colors for the woodwork. Restoring their authentic nineteenth-century appearance on the first and second floors of the Homestead, will reinstate the largest canvasses portraying the atmosphere of the home.
Parlors
The restored parlors will recapture the essentials of the Dickinsons’ daily life and interests in music, needlework, reading, art, civic and business affairs, and entertaining. The rooms will be decorated, as reported by Emily Dickinson’s niece, in wallpaper “white with large figures” and a carpet woven with “a great basket of flowers, from which roses were spilling all over the floor to a border of more flowers at the edge.” They will be furnished with items acquired at the time of Edward and Emily Norcross Dickinson’s marriage in 1828, as well as those acquired to keep their home reasonably in step with fashion.
Northwest Chamber
The second-floor northwest chamber adjacent to Emily’s room, the space where her mother, Emily Norcross Dickinson, spent the last years of her life, will include the reproduction of wallpaper based on found fragments, removal of modern floorboards, furnishing with Dickinson family artifacts, among other details. The restored northwest chamber will illuminate nuanced family relationships and the significance of health and healthcare in Dickinson’s life.
Implementation of Environmental Regulating Systems
The Homestead and The Evergreens will be equipped with new heating and cooling systems that will provide the level of temperature and humidity control that historic house museums need to protect their collections. The new systems will replace aging and limited residential systems and will contribute to the Museum’s long-term preservation and stewardship goals. “With behind-the-scenes installation of mechanical systems taken care of,” said Wald, “we’ll be able to focus on the fascinating work of further restoration and educational programming.”

For press-approved images, please visit: bit.ly/EDMRestorationPhotos
For additional images, please reach out to publicrelations@emilydickinsonmuseum.org
This project has been funded in part by the generous gift of the late William McC. Vickery (Amherst College ‘57) and in part by the National Endowment for the Humanities.
ABOUT THE EMILY DICKINSON MUSEUM
The Emily Dickinson Museum: The Homestead and The Evergreens is dedicated to sparking the imagination by amplifying Emily Dickinson’s revolutionary poetic voice from the place she called home.
Owned by the Trustees of Amherst College, the Emily Dickinson Museum is overseen by a separate Board of Governors and is responsible for raising its own operating and capital funding.
The Emily Dickinson Museum is a member of Museums10, a collaboration of ten museums linked to the Five Colleges in the Pioneer Valley—Amherst, Hampshire, Mount Holyoke, and Smith Colleges, and the University of Massachusetts Amherst.
Posted in Events & News.