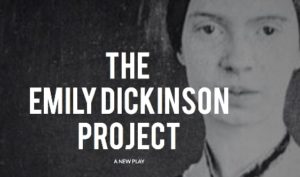 A co-production of TheatreTruck and The Emily Dickinson Museum

Tickets: Tickets are available for reservation and will also be available at the door. Reserve spots early; only 15 audience-members per night.

Multiple possibilities of Emily Dickinson, each character a variation of the unique voice  that makes up the single persona of the poet, form the basis of The Emily Dickinson Project, an immersive, site-specific play that traces the moments of Dickinson’s life through a journey from her gardens through her home.

“The Emily Dickinson Project was such a big hit last year, thanks to the imagination, deep research, and skilled production that went into it,” said Emily Dickinson Museum Executive Director Jane Wald. “Dickinson’s own home and gardens are a powerful stage for this dynamic theater event, which audiences appreciated immensely. It’s wonderful to have the performance back again for an extended run.”

The play was co-written by Emma Ayres and TheatreTruck co-founder Brianna Sloane, and is directed by Sloane with production design by Elizabeth Pangburn and original music by Ayres. The words spoken by the eight variations are entirely Dickinson’s, drawn from her personal correspondence and poetry.

“The Emily Dickinson Project is a look into the world of the poet using the same approach Emily took with her poetry, examining multiple possibilities, with variations of person instead of words,” said Sloane.

Guests should come dressed for the weather, prepared to walk over uneven terrain and up and down stairs.