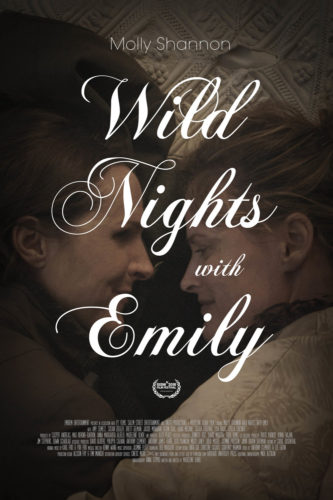 Location: The screening will take place in Lipton Lecture Hall in the Amherst College Science Center on the east side of campus from 5:00 p.m. to 7:00 p.m. The hall is room E110 and is located on the first floor by the cafe.

Parking: Parking is available along East Drive and Merrill Science Drive and no permit is required (even if indicated).

In the mid-19th century, Emily Dickinson is writing prolifically, baking gingerbread, and enjoying a passionate, lifelong relationship with another woman, her friend and sister-in-law Susan. Beloved comic Molly Shannon leads in this humorous yet bold reappraisal of Dickinson, informed by her private letters. While seeking publication of some of the 1,789 poems written during her lifetime, Emily (Shannon) finds herself facing a troupe of male literary gatekeepers too confused by her genius to take her work seriously. Instead her work attracts the attention of an ambitious woman editor, who also sees Emily as a convenient cover for her own role in buttoned-up Amherst’s most bizarre love triangle.

Madeleine Olnek is a New York City based playwright and filmmaker. Her third feature film, Wild Nights With Emily, was awarded a Guggenheim Fellowship and awards from NYSCA and Jerome Foundation funds. Her second feature, The Foxy Merkins, included screenings at Sundance 2014, BAM Cinemafest, Lincoln Center, and an NYC theatrical run at IFP. The film had its international premiere at the Moscow Film Festival. Her debut feature, Codependent Lesbian Sex Alien Seeks Same, premiered at Sundance 2011. Its screening included MoMa, The Viennale and the Festival do Rio. Nominated for a Gotham award, it had theatrical runs in LA and NYC. Her award-winning and widely screened comedy shorts, “Countertransference” (2009), and “Hold Up” (2006), were official selections of Sundance; “Make Room For Phyllis” (2007) premiered at Sarasota. Olnek was awarded best female short film director at Sundance in 2009, by LA’s Women In Film organization.