“I am not unconcerned Dear A. upon the all important subject, to which you have so frequently & so affectionately called my attention in your letters. But I feel I have not yet made my peace with God…. Abby & I talk much of the happy hours we used to spend together with yourself, Sarah & Hattie Merrill. Oh! What would I give could we all meet again. Do write me soon Dear A & let it be a long—long letter. Don’t forget—!!!!!” 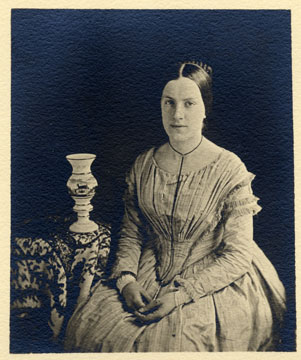 Abiah Palmer Root came to Amherst to live with her cousins the Palmers and attend Amherst Academy, where she joined Emily Dickinson’s group of five close girlhood friends. After one or two terms at the Academy, “Biah” returned home to Feeding Hills, near Springfield, Massachusetts, and enrolled in Miss Campbell’s school. Thus the intimacy between the two girls came to rely upon the mail and Root’s occasional visits. Root clearly valued this correspondence, saving Dickinson’s letters, and making them available to Mabel Loomis Todd for her 1894 edition of the poet’s Letters.

Abiah Root’s side of the correspondence has been lost but the twenty-two extant letters Dickinson wrote to her friend between 1845 and 1854 provide a rich portrait of the poet’s youth. These letters are full of information about Dickinson’s activities and schooling from her tourist outings in Boston (L13) to the pleasures of a “Candy Scrape” (L20), the trials of household chores (L36), and the rules and schedule at Mount Holyoke Female Seminary (L18). The letters express deep affection for her friends, and Dickinson’s whimsical and often highly self-conscious writing reveals her experimenting with literary style.

Dickinson described Root as “dignified” and serious (L91), and she appears to be the friend whom Dickinson most trusted to hear her own spiritual wrestling. The daughter of a deacon and later married to a minister, Root’s own commitment to Christ seems to have come with easy clarity: “I shed many a tear & gave many a serious thought to your letter & wished that I had found the peace which has been given to you,” Dickinson wrote to her friend in 1846 (L11). “You know of this depth, and fullness [sic], will you try to tell me about it?” Dickinson asked four years later in a letter that describes the spiritual revivals in Amherst and her own unsaved plight as “one of the lingering bad ones” (L36).

Distance did have costs for their friendship. “I can think of no other way than for you, my dear girl, to come here—we are growing away from each other, and talk even now like strangers,” Dickinson complained in one letter (L39). Yet more than geographic distance their correspondence reveals their growing differences not only in religious feeling, but also in life roles and avocation. In the summer before her marriage to Reverend Samuel Strong, Abiah Root wrote to Dickinson urging her friend to visit and presumably to meet Rev. Strong. Dickinson’s response, sent more than a month later, expresses nostalgic gratitude for “loving me long ago and today,” but it ends with a sharp assertion of Dickinson’s willful disengagement from the social world. In declining to visit she calls herself “old fashioned” and explains that she leaves home “obstinately, and draw back if I can” (L166). “Why think of it seriously, Abiah,” she continues, “—do you think it my duty to leave?” (L166).

At fourteen Dickinson laughed with Root at the idea of “finishing” an education–“you may then be Plato, and I will be Socrates” she joked—and she celebrated her letters for having “so much nonsense to tell” (L5). A decade later Root had chosen the expected roles and responsibilities of marriage, while Dickinson, just beginning to write her poetry, claimed a very different sense of duty, where telling nonsense and unfinished seeking still reigned.