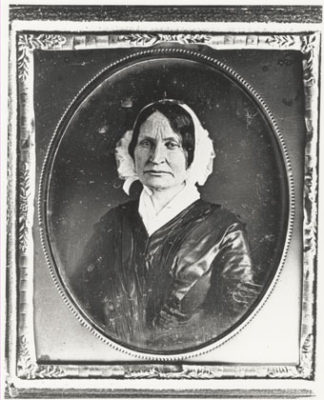 Mary Lyon was a pioneering educator of women. In 1837 she founded Mount Holyoke Female Seminary, which Emily Dickinson attended in 1847-48. Lyon was born in Buckland, Massachusetts, on February 28, 1797. She was one of seven children born to Aaron Lyon, a Scottish farmer, and Jemima Shepherd Lyon. Mary Lyon attended Buckland School from the age of four until she was thirteen, often boarding with local families since it was too far to travel home each day.

When Lyon was seventeen, she was invited to teach summer school in Shelburne Falls, Massachusetts. At that time teachers often entered the workforce with few formal qualifications. For twenty years Lyon continued her teaching career at several schools, including Ipswich Female Seminary, which Lavinia Dickinson later attended. While teaching, Lyon used her income and a small inheritance to further her education by traveling and studying educational reform.

In 1834 Lyon decided to leave teaching in order to raise funds for a female seminary accessible to women of modest means. Lyon conceived of a seminary founded on the principles of public benevolence, as opposed to the customary practice of funding by a wealthy benefactor. She tirelessly traveled the country collecting donations in a green velvet purse. She made a special request of church sewing societies throughout New England to contribute quilts and bedding that would furnish a chamber for each student. To keep tuition low, seminary students would live together as a family in one large building and would do much of the school’s housework (cleaning, cooking, and laundering).

On November 8, 1837, Mount Holyoke Female Seminary admitted its first eighty students. Mary Lyon had high academic standards for her students. An admirer of the Amherst College curriculum, she developed a rigorous course of study that included the sciences, not a subject commonly emphasized at men’s or women’s schools. She also tirelessly worked to improve the students’ religious lives, holding year-long revivals intended to culminate in each student’s personal confession of faith.

Emily Dickinson entered the seminary in 1847, a decade after its founding. Writing her friend Abiah Root, Dickinson observed that the atmosphere at the seminary was congenial. “One thing is certain,” she wrote, “& that is, that Miss Lyon & all the teachers, seem to consult our comfort & happiness in everything they do & you know that is pleasant” (L18). Like many of the students, she stayed for only one year; unlike most of them, she remained one of those “without hope” where faith was concerned.

Mary Lyon pursued her mission to educate women until her death on April 5, 1849. Educators later viewed Mount Holyoke as a model for women’s education. In 1893, the seminary became Mount Holyoke College. Lyon’s gravesite is on the College grounds. Mary Lyon’s legacy is celebrated at her graveside during the annual Mount Holyoke College commencement ceremony and every year on her birthday.