The donation to the Museum made by Apple TV+ and wiip Productions includes over 300 items from the sets of Dickinson and over 100 costume pieces. 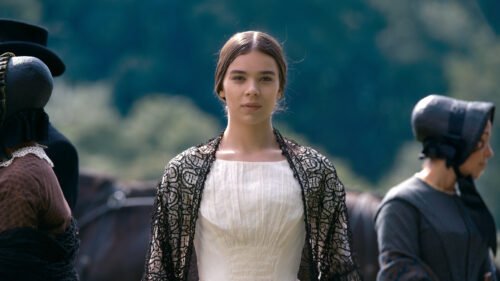 (AMHERST, Mass., December 10, 2021) – The Emily Dickinson Museum today announced a major gift from the Apple TV+ and wiip Productions award-winning series Dickinson, of a full range of set pieces, costumes and props. The gift includes antique furniture and objects acquired by the show to furnish as authentically as possible the sets of the Dickinson residences, the Homestead and the Evergreens, as well as costumes worn by the principal actors.

Created by Alena Smith, Dickinson is a half-hour comedy series that audaciously explores the constraints of society, gender and family from the perspective of the rebellious young poet, Emily Dickinson. Set in the 19th century, the series is a coming-of-age story that has helped the poet gain hero status among millennials. The series stars Hailee Steinfeld, Toby Huss, Ella Hunt, and Jane Krakowski, and has included guest appearances from Wiz Khalifa, John Mulaney, Zosia Mamet, and Nick Kroll. The third and final season began streaming on Apple+ on November 5, 2021.

The production worked closely with the Emily Dickinson Museum throughout its filming. During pre-production, various members of the production crew visited the Museum in Amherst, Mass., to study the architecture and floor plans of the two homes. Principal actors toured the Museum as they worked on inhabiting members of the Dickinson family and their circle. As the series unfolded, researchers and production staff regularly reached out to the Museum to track down details of family friends and acquaintances, the look and feel of nineteenth century Amherst, and the gardens and grounds, among other topics.

“I can’t imagine a more meaningful conclusion to the journey of making Dickinson than giving this gift to the Dickinson Museum,” said Creator and showrunner Alena Smith. “It is the greatest end to the story I wanted to tell, and makes me feel so proud that these pieces of our production will contribute to Emily’s legacy and help the Museum in its mission of deepening scholarly and historic preservation. I love that the show was able to introduce Emily to new generations around the globe, and that it will continue to help make the Museum a place of even more international prominence. Just to know that in 20 years fans can come to the Museum and see a lasting piece of the Dickinson world we built is amazing to me. It makes my heart sing.”

“The Dickinson show and the Museum share the goal of amplifying Emily Dickinson’s powerful and revolutionary poetic voice,” said Museum Executive Director Jane Wald, “and we’re thrilled that the show has introduced so many to that voice. This wonderful gift from Dickinson, AppleTV+, and wiip Productions is inspired by Dickinson’s poetic legacy–one that inspired the show in the first place and that endures not only here at her home but, as it should, throughout the world.” 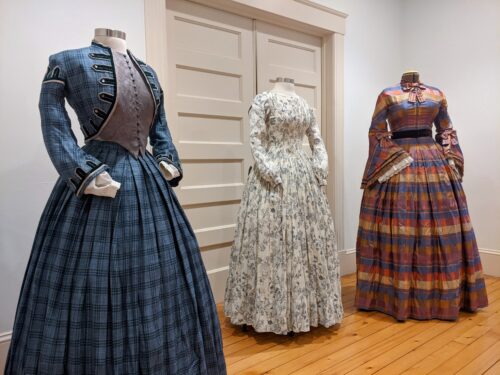 Antiques from the set of Dickinson are appropriate to the time period of the Dickinson residences that comprise the Museum and were sourced in the same ways the Museum would have done so to acquire appropriate objects for its collection. While these items from the show do not have Dickinson provenance, they will augment the Museum’s collection of original furnishings to imbue the rooms of the Museum with greater immersive power. Future visitors will encounter some of these objects in more fully furnished spaces and enjoy an expanded opportunity to engage with the trappings of daily life at the Homestead and The Evergreens.

On December 10, 2021, the Emily Dickinson Museum presented a closer look at the items from the donation during the annual Emily Dickinson Birthday Celebration, which marked the 191st anniversary of the poet’s birth. Including interviews with production designers, as well as behind-the-scenes looks at the ongoing Homestead restoration, this virtual program drew a global audience from over 60 countries.

The Museum is currently closed while it is undergoing a major restoration project and will reopen in Spring 2022.

The Emily Dickinson Museum: The Homestead and The Evergreens is dedicated to sparking the imagination by amplifying Emily Dickinson’s revolutionary poetic voice from the place she called home.

The Emily Dickinson Museum is owned by the Trustees of Amherst College and overseen by a separate Board of Governors. The Museum is responsible for raising its own operating and capital funds. The Museum is proud to celebrate the bicentennial of Amherst College. The Dickinson family were intimately connected with Amherst College in its first 75 years, beginning with the poet’s grandfather, who helped to found the institution. The College was an early and lasting influence in the poet’s own life, playing an inestimable role in her early education and friendships, and later connecting her to an ever-widening local and global community.

The Emily Dickinson Museum is a member of Museums10, a collaboration of ten museums linked to the Five Colleges in the Pioneer Valley—Amherst, Hampshire, Mount Holyoke, and Smith Colleges, and the University of Massachusetts Amherst.