Emily Dickinson was born at the Homestead on December 10, 1830. Her quiet life here was infused with a creative energy that produced almost 1,800 poems and a profusion of vibrant letters. Her increasing withdrawal from public life limited her audience during her lifetime to family and friends, and her work remained virtually unpublished until after her death on May 15, 1886. 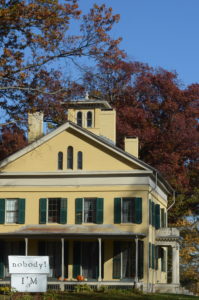 Although the poet’s reclusiveness kept her close to home, her intellectual curiosity and emotional intensity tied her deeply to the world around her. Among her most significant lifelong relationships were those with her brother Austin and sister-in-law Susan, who lived just next door in a fashionable Italianate house that they named The Evergreens. Through their varied intellectual and aesthetic interests and their involvement in community affairs, the couple made their home into a center of social and cultural life, hosting both local residents and prestigious visitors. The couple’s three children, Ned, Martha, and Gilbert, were an added source of energy and joy to both the Homestead and The Evergreens.

After Emily Dickinson’s death her poems and life story were brought to the attention of the wider world through the competing efforts of family members and intimates. Her sister, Lavinia, and neighbor Mabel Loomis Todd saw to the initial publication of her poems. In the early twentieth century, the poet’s niece, Martha Dickinson Bianchi, edited additional collections and memoirs and preserved The Evergreens as a memorial to her aunt and family. Largely because of these efforts, Dickinson’s unique voice on the literary landscape has captured diverse audiences throughout the world.