Although Lavinia Dickinson, the Poet’s sister, once described Emily as the “only one of us who had to think,” all of the Dickinsons were bright, inquisitive people—and they reflected their love of learning in their homes. Both the Homestead and The Evergreens had libraries—a room that architect A. J. Downing deemed appropriate for “intellectual culture.”

In 2012, the Emily Dickinson Museum continued to implement the Museum’s furnishings plan (2007) by focusing on refurbishing the spaces that the Dickinson family used as libraries. The furnishings plan is a long-range document—based on historical evidence—that guides the interpretation and display of rooms in the two Dickinson houses. In the past four years, the Museum has implemented aspects of the plan in the Emily Room and the dining room at The Evergreens. 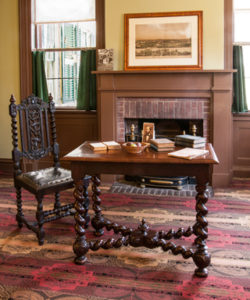 In accordance with the plan, floor coverings and window treatments have been installed in both rooms. Furnishings, artwork, and other objects belonging to the Dickinson family have been rearranged or added to these rooms to achieve the furnishings plan’s goals.

Because Emily Dickinson’s family at the Homestead left little evidence of the library’s appearance, decisions about carpeting and window treatments were based largely on common practices of the time. At the Homestead, a reproduction ingrain carpet (a flat, woven carpet made from wool dyed before weaving), typical of middle-class family homes in the mid-nineteenth century, covers the library floor. Likewise, the half-curtains and fabric shades at the large windows are suitable for a less formal room in a home.

In contrast, the Dickinson family at The Evergreens left a detailed account of their home decor. As Susan Dickinson’s 1895 inventory of the house indicates, lace curtains hung in the library’s bay windows, and several Turkish rugs were arranged on the floor throughout the room. With surviving examples of curtains and rugs as a guide, the Museum selected a reproduction Madras muslin curtain and a Near-Eastern-style reproduction rug to use in the library at The Evergreens alongside other rugs from the collection. 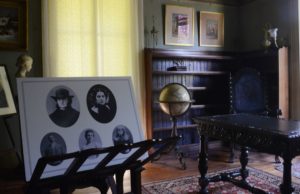 The libraries were clearly among the Dickinsons’ favorite spaces in the houses. At the Homestead, the library was adjacent to the poet’s beloved conservatory, and her letters suggest that more than reading went on in the room. In 1859 she wrote to Samuel Bowles “Shall I keep the Wine till you come again, or send it by ‘Dick?’ It is now behind the door in the Library” (L205). Much later, Dickinson describes a quiet domestic scene with Mother “asleep in the Library” (L 432, 1875). At The Evergreens, the library hosted numerous intimate gatherings, as family friend Kate Scott Anthon later recounted: “Those celestial evenings in the Library—the blazing wood fire—Emily—Austin, the music—the rampant fun—the inextinguishable laughter, the uproarious spirits of our chosen—our most congenial circle.”

Visitors may view these rooms as part of the Museum’s regular guided tours. This project was funded with support from the Museum’s annual fund. The Museum will continue to implement the furnishings plan as funds become available.