The Emily Dickinson Museum – The Homestead and The Evergreens – was formed in 2003 from a transfer of the property and assets of the Martha Dickinson Bianchi Trust to the Trustees of Amherst College. The Museum is owned by Amherst College and governed by an independent Board of Governors. 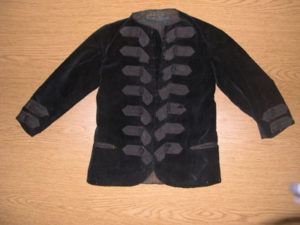 Edward Dickinson, the poet’s father, owned the Homestead from 1855 until his death in 1874. The last heir in Edward Dickinson’s direct line was Austin’s daughter, Martha Dickinson Bianchi, who inherited the Homestead after Emily’s younger sister, Lavinia, died in 1899. She leased the Homestead to tenants from 1899 to 1916, when she sold the house to the Parke family. During this time, all of the Dickinsons’ furnishings and personal belongings were removed from the Homestead and were either moved next door to The Evergreens (see below), given away, or sold.

The Parke family maintained the Homestead as a private residence until 1965, when Amherst College bought the property. In addition to acknowledging the need to open the house to visitors, the College dedicated much of the house to use as a faculty residence. The resident also served as a curator of the property. A curator was in residence at the house until 1999.

Martha Dickinson Bianchi became full owner of The Evergreens after her mother Susan’s death in 1913, and maintained it as her own residence. As a memorial to her aunt, Bianchi placed manuscripts and artifacts with particular connection to the poet (her bureau, piano, writing desk, etc.) in the northeast room on the first floor of The Evergreens, which came to be known as the “Emily Room.” Upon her death in 1943, Martha Dickinson Bianchi’s friend and literary assistant, Alfred Hampson, inherited The Evergreens and its contents. He and his wife Mary occupied the house and maintained it much as it was during the Dickinson family’s residence. During their ownership of the Evergreens, the Hampsons arranged for the transfer of many of the items furnishing the Emily Room to Harvard University where they are now housed in the Houghton Library.

The Evergreen’s Parlor as Seen Today

Upon Mary Hampson’s death in 1988, the Martha Dickinson Bianchi Trust was established to receive and develop the Evergreens and its contents as a cultural facility for scholars and the public. The Trust proceeded with this charge until it transferred ownership of The Evergreens to Amherst College in 2003.

When Amherst College purchased the Homestead in 1965, no collection came with the house. By that time, most of Dickinson’s personal belongings had been dispersed and, for many objects, the location is not known. Since 1965, the Homestead has slowly collected and borrowed objects to help tell the story of Emily Dickinson. 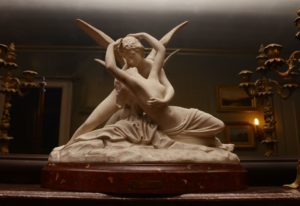 A Furnishings Plan for the Homestead and The Evergreens was completed in 2007. The Plan provides detailed guidance on maximizing the use of the Museum’s collection to present as faithfully as possible the lives of the Dickinson family at the two homes during a period of significance which spans the family’s re-acquisition of the Homestead in 1855 to the death of Susan Dickinson in 1913.