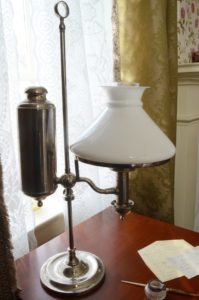 An important research goal for the furnishings plan was to investigate the dispersed Dickinson-related archival materials. The aim was to glean documentary sources for any information regarding the Dickinson home and its furnishings.

Another research goal was to examine existing furnishings in both the Homestead and in The Evergreens. Many objects now at The Evergreens originated at the Homestead, which was sold out of the family in 1916. By that time, family furnishings had been sold or were moved next door to The Evergreens. The Homestead has been sparsely furnished since it was first opened to the public in 1965. The merging of the Homestead and The Evergreens into one museum in 2003 has made it possible to consider all objects in both houses and to attempt to sort out object origins. For the furnishings and exhibit plan project, inventories and purchase records from The Evergreens for the years 1856, 1895, 1922-3, 1952, and 1987 were studied to help determine the origins of pieces in the collections and their changing uses and locations over time.

In general, the plan describes the furnishings relevant to the interpretation of the Homestead from the time of the Dickinson family’s return there in 1855 until Emily’s death in 1886, and of The Evergreens from its construction in 1856 until Susan Dickinson’s death in 1913. The entries are arranged by room. The double parlors at the Homestead and the library at The Evergreens are presented here as examples of how the furnishings plan can be used by the Museum to enhance its interpretation of the lives of the poet and her family. More than half of those questioned in a recent survey indicated that they were very interested in the material culture collections. Part of this interest may stem from the visitor’s desire to understand the surroundings in which Emily Dickinson lived and worked. Because “home” was so important to Dickinson and because of the mythology associated with the poet and her home, the furnished spaces should serve as significant interpretive tools. Implementation of the plan will proceed as funds become available.