In Fall 2009, the Emily Dickinson Museum completed restoration of the hemlock hedge and historic fences, gates and gateposts spanning the front of the Dickinson property. The Museum celebrated this significant landscape restoration project with a ribbon-cutting on September 26, 2009.

“One of the museum’s goals is to bring back the Dickinson homes and grounds to their appearance during the period the poet lived and wrote here,” said Jane Wald, executive director of the museum. “The natural world and this landscape were vitally important to the Dickinson family, and we want our patrons to be able to see and imagine how it looked then.” The restoration of the hedges was practical as well; in 2008, a certified arborist confirmed the presence of woolly adelgid and hemlock scale, two infestations that have caused many of the once-beautiful trees to fail. 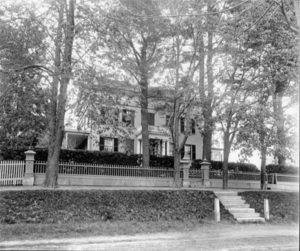 The Evergreens as it appeared circa 1880. (Houghton Library)

The 900-foot-long hemlock hedge was originally planted in the 1860s, a few years after an extensive mid-century renovation of the family Homestead and construction next door of The Evergreens for Austin and Susan Dickinson. Based on contemporary views of Amherst and scattered documentary clues, the fences were probably already in place at the time the hedge was planted. The original design intent for the hedge was to allow a clear view of the upper stories of both homes, while shielding the gardens from casual view by passersby.

The hedge was carefully maintained by the Dickinsons at a height of between six and ten feet until the end of the 19th century. Since then, however, the fences have been removed and the hemlocks have grown to heights of 30 to 50 feet, so that the overgrown hedge blocks any views to or from the Dickinson houses on their elevated terraces. 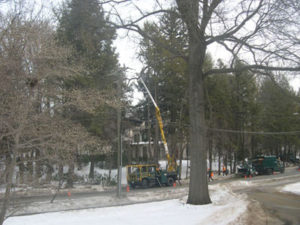 The overgrown hemlocks are taken down in short sections for safety along the public way and to protect the interior landscape. 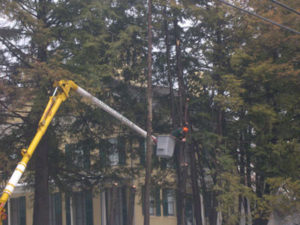 As the hemlocks are removed one at a time, the facades of the Homestead and The Evergreens are slowly revealed.

The stone steps in front of the Homestead leading down to the street were re-set on a concrete foundation and the granite coping wall adjacent to the sidewalk was re-built. Following that masonry work, fences, gate posts and pedestrian gates reproduced from elements still in the museum’s collection were installed. Planting of some 200 young hemlocks to form the new hedge behind the fence completed the project. 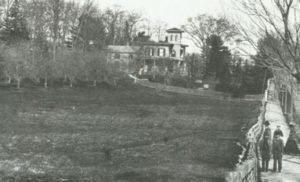 The view above looks east down Main Street toward The Evergreens in the 1860s. 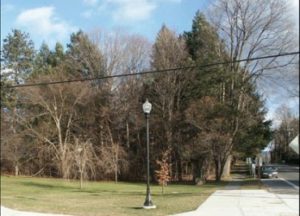 The same view above illustrates the effects of time and unchecked growth.

The $275,000 project was funded entirely by private contributions. It grew out of a master plan for stewardship of the Dickinson property prepared by consulting preservation architectural firm Mesick Cohen Wilson Baker Architects LLC of Albany, New York. The plan, which was accepted by the museum’s Board of Governors in 2006, made numerous recommendations for immediate and long-term measures to preserve and restore the historic structures and grounds. The museum has been systematically addressing these recommendations since their adoption. The landscape portion of the Master Plan was funded by a Town of Amherst Community Preservation Act grant of $15,000 in 2005. 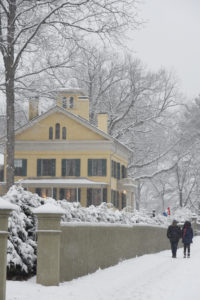 The new fence in the snow. 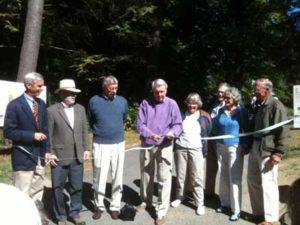 Bill Vickery cuts the ribbon as other board members look on.