Emily Dickinson, the middle child of Edward and Emily Norcross Dickinson, was born on December 10, 1830, in the family Homestead on Main Street in Amherst, Massachusetts. Just two months earlier, her parents and older brother Austin had moved into the Homestead to live with Edward’s parents, Samuel Fowler and Lucretia Gunn Dickinson, and several of Edward’s siblings. 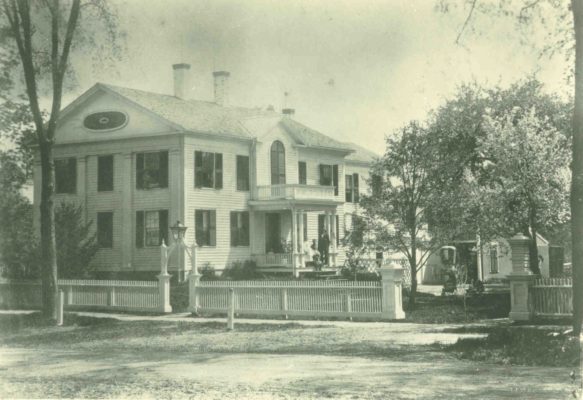 Shortly after Emily’s younger sister Lavinia was born in 1833, their grandparents moved to Ohio after several years of troubling financial problems in Amherst. The Homestead was sold out of the family, but Emily’s family remained in the Homestead as tenants for seven more years.

The crowded house and Edward’s growing legal and political career called for new quarters, and when Emily was nine years old, her family purchased a house on what is now North Pleasant Street in Amherst. Close to her older brother Austin and younger sister Lavinia, Dickinson had a fond attachment to the house on Pleasant Street. Domestic duties like baking and gardening occupied her time along with attending school, taking part in church activities, reading books, learning to sing and play the piano, writing letters, and taking walks.

Dickinson’s formal schooling was exceptional for girls in the early nineteenth century, though not unusual for girls in Amherst. After a short time at an Amherst district school, she attended Amherst Academy for about seven years before entering Mount Holyoke Female Seminary (now Mount Holyoke College) in 1847. She stayed at the Seminary for one year, the longest time she spent away from home.

In youth Dickinson exhibited a social flair that retreated as she grew older: “I am growing handsome very fast indeed! I expect I shall be the belle of Amherst when I reach my 17th year. I don’t doubt that I will have crowds of admirers at that age” (L6). She found delight in numerous female friendships, including those with Abiah Root, Abby Wood, Emily Fowler, and Susan Gilbert, who later became her sister-in-law. Although Dickinson never married, she had several significant male friends, among them Benjamin Newton, from whom she received her beloved copy of Emerson’s Poems, and Henry Vaughn Emmons, with whom she shared some of her own early poetry. There is evidence she received at least one marriage proposal, from George H. Gould, a graduate of Amherst College, which came to naught.

Dickinson’s youthful years were not without turmoil. Deaths of friends and relatives, including her young cousin Sophia Holland, prompted questions about death and immortality. From the Pleasant Street house, located near the town cemetery, Dickinson could not have ignored the frequent burials that later provided powerful imagery for her poems.

A wave of religious revivals in Dickinson’s teen years addressed her Calvinist society’s concern for the disposition of the human soul. Although Dickinson’s friends, sister, father, and eventually brother all joined the church (her mother had joined the year after Emily was born), Emily never did, acknowledging plainly to a friend, “I am one of the lingering bad ones” (L36).

In Dickinson’s early twenties, writing became increasingly important to her. In a letter to Austin that took him to task for writing poetry, she reveals something more significant about herself: “I’ve been in the habit myself of writing some few things, and it rather appears to me that you’re getting away my patent, so you’d better be somewhat careful, or I’ll call the police!” (L110) Her earliest extant writings—both are Valentines and uncharacteristic of her later work–were published anonymously during this period. A letter (“Magnum bonum, harem scarum”) appeared in the Amherst College student publication The Indicator in 1850, and a poem “‘Sic transit gloria mundi,’” in the Springfield Daily Republican in 1852.

Dickinson’s letters to her brother also reveal a growing sense of “difference” between herself and others: “What makes a few of us so different from others? It’s a question I often ask myself” (L118). This sense of distinction became more pronounced as she grew older and as her poetic sensibilities matured.