“‘Faith’ is a fine invention
For Gentlemen who see!
But Microscopes are prudent
In an Emergency!”
-Fr202

Emily Dickinson lived in an age defined by the struggle to reconcile traditional Christian beliefs with newly emerging scientific concepts, the most influential being Darwinism. Dickinson’s struggles with faith and doubt reflect her society’s diverse perceptions of God, nature, and humankind. 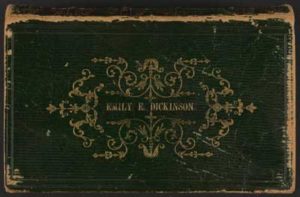 Emily Dickinson’s bible, a gift from her father Edward in 1844

Brought up in a Calvinist household, the young Emily Dickinson attended religious services with her family at the village meetinghouse, Amherst’s First Congregational Church (the building now houses Amherst College administrative offices). Congregationalism was the predominant denomination of early New England. Amherst College itself was founded in 1821 by Congregationalists to educate more young men for Christian ministry. During Dickinson’s lifetime, the religious landscape diversified to include Methodists, Baptists, Unitarians, and, eventually, Catholics.

Like most Amherst families, the Dickinsons held daily religious observances in their home. Dickinson received her own Bible from her father at age 13. Her familiarity with the Bible and her facile references to it in letters and poems have long impressed scholars.

Ministers from the church were regular guests at the Dickinsons’ house, and several became close friends. Dickinson commented on sermons in her letters (“We had such a splendid sermon from that Prof Park-I never heard anything like it . . . “(L142)), and the influence of church music on her poems is apparent in her use of the common meter on which many hymns are based. 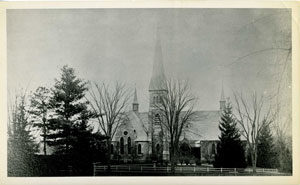 In Dickinson’s teen years, a wave of religious revivals moved through New England. One by one, her friends and family members made the public profession of belief in Christ that was necessary to become a full member of the church. Although she agonized over her relationship to God, Dickinson ultimately did not join the church–not out of defiance but in order to remain true to herself: “I feel that the world holds a predominant place in my affections. I do not feel that I could give up all for Christ, were I called to die” (L13). By the time the First Congregational Church moved to a site near the Homestead on Main Street in 1868, Emily Dickinson had stopped attending services altogether.

Dickinson’s attitude toward spiritual matters was more complex than her poem “Some keep the Sabbath going to church / I keep it staying at home” (Fr236) implies. While her poems are saturated with the language, ritual, and expectation of traditional religious experience, her tone varies tremendously. Some poems affirm the need for faith: “Faith – is the Pierless Bridge / Supporting what We see / Unto the Scene that We do not – ” (Fr978). Irreverence underlies other aspects of her work: “The Bible is an antique Volume – / Written by faded Men / At the suggestion of Holy Spectres -” (Fr1577). At times Dickinson’s poetry expresses outright anger with an absent God:

Despite her non-participation in public religious life, Dickinson’s poems reveal a keen interest in issues of faith and doubt, suffering and salvation, mortality and immortality. Deaths of friends and family members, the Civil War, and close observation of nature’s cycles prompted poetic musings on religious themes throughout her life.

Although Dickinson’s immediate family accepted the poet’s decision to keep the Sabbath “staying at home,” her father once asked Rev. Jonathan Jenkins, minister of First Church from 1867-77, to meet with his daughter and assess her spiritual health. Rev. Jenkins’s diagnosis? “Sound” (Habegger, p. 542).

Habegger, Alfred. My Wars Are Laid Away in Books: The Life of Emily Dickinson. New York: Random House, 2001.