In the Dickinson family, Edward Dickinson was the chief guardian of health. When his children were little, his letters when absent from home were full of cautions to them against taking cold or attending school in inclement weather or ignoring symptoms of illness. Such anxieties were well founded in a time before antibiotics and knowledge of germ theory, when illnesses that we shrug off today could be serious, even fatal.

Edward’s particular fear of tuberculosis (also called consumption), a rampant nineteenth-century lung disease then understood to be heritable, and which apparently “ran” in Mrs. Dickinson’s family, led Mr. Dickinson to excessive caution. Late in life the poet mentioned that her father thought her consumptive when a child (L401), and at least twice she was kept from finishing the term at Amherst Academy because of severe colds. Edward’s abrupt month-long removal of his daughter from Mount Holyoke Female Seminary in late winter of 1848 because of her lung congestion and cough inspired Dickinson’s comment, “Father is quite a hand to give medicine, especially if it is not desirable to the patient” (L23).

In 1851, a year when several of her contemporaries died of tuberculosis, Dickinson also displayed consumptive symptoms for which she consulted local and Boston doctors. For two years she dosed with a glycerine prescription from Boston’s eminent TB specialist, Dr. James Jackson, until her symptoms apparently subsided.

The key medical concern of Dickinson’s adult life was an eye affliction suffered in her mid-thirties, during her most prolific period of writing poems. By her own account it began in the fall of 1863 (L290), and in February 1864 she consulted the eminent Boston ophthalmologist Dr. Henry Willard Williams. Then for eight months, from April to December 1864, she lived with her Norcross cousins in Cambridgeport to be near that physician for treatment. The next year, with her eyes still painful and sensitive to light, she repeated the treatment from April to October 1865. By then she was apparently cured. 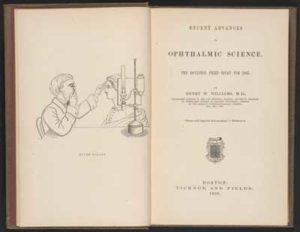 While several theories have been advanced, the most likely explanation for the eye problem, based on clues in Dickinson’s letters and what is known of Dr. Williams’ therapies, is that she suffered from iritis, an inflammation of the fine muscles of the eye. For Dickinson, who feared blindness, prolongation of this illness was agonizing in ways beyond the physical. Her doctor’s orders for confinement in dim light, no reading, and writing only with a pencil explain why she called her first Cambridge siege “eight months of Siberia” (Sewall, Lyman Letters, p. 76). Yet she managed to write letters (in pencil) and confessed that despite the deprivations, “I work in my prison, and make Guests [poems] for myself”(L290).

No discussion of the poet’s health is complete without mentioning her increasing withdrawal from normal social situations, which began in her mid-twenties. Among Dickinson scholars, disagreement exists concerning whether hers was a deliberate choice as an artist to isolate herself so she could focus on her work or whether such unusual behavior as her startled flight from the doorbell, an increasing inability to see or visit friends, and speaking with select visitors from behind a darkened door rather than face to face, had a medical origin, such as an anxiety condition. In any event, the poet and her family accommodated her unusual ways, which left strong marks on her poetry, including her desire not to publicly publish her poems during her lifetime.

For Dickinson’s medical concerns at the time of her death, please see Emily Dickinson and Death.

Hirschhorn, Norbert. “Was it Tuberculosis? Another Glimpse of Emily Dickinson’s Health.” The New England Quarterly (March 1999). 102-118.

Sewall, Richard B. The Lyman Letters: New Light on Emily Dickinson and Her Family. Amherst: University of Massachusetts Press, 1965.