“I am going to learn to make bread to-morrow. So you may imagine me with my sleeves rolled up, mixing flour, milk, salaratus, etc., with a great deal of grace. I advise you if you don’t know how to make the staff of life to learn with dispatch.”
– Emily Dickinson to Abiah Root, September 25, 1845 (L8)

“In later years, Emily Dickinson claimed that her father approved no bread except hers; she was, indeed, an accomplished baker. Her round loaf of Indian and Rye won second prize in the Amherst Cattle Show of 1856, though admittedly her sister Lavinia was one of the judges. Dickinson specialized in desserts as well. Thomas Wentworth Higginson reported Dickinson’s comments about sweets in a letter to his wife: “‘People must have puddings’ this [was said] very dreamily, as if they were comets—so she makes them” (L342a). 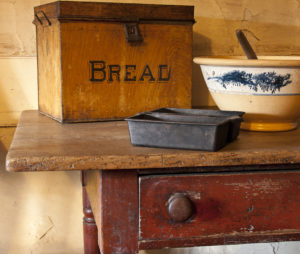 A glimpse into the kitchen at the Evergreens

The pride and pleasure that Dickinson associates with baking are one of the ways in which she seems most aligned with traditional female roles, though her version of these activities stresses the marvelous: she described “twin loaves of bread” as “the glory” (L36) and was “pleased the Gingerbread triumphed” (L369).

The kitchen appears to be one of the rooms where Dickinson felt most comfortable, perhaps most at home, and her letters give frequent testimony to the pleasures of family conversation held there. The many drafts of poems written on kitchen papers tell us also that this was a space of creative ferment for her, and that the writing of poetry mixed in her life with the making of delicate treats.

On the back of a wrapper of Parisian baking chocolate she scribbled words toward a poem. A poem drafted on the back of Mrs. Carmichael’s recipe for coconut cake (“The Things that never can come back, are several” [Fr1564]) meditates on loss and on the precarious ways that distant “Joys” might return “Here” to “Native Land.” The account book of Cutler’s General Store in the center of Amherst shows the Dickinson family purchasing such exotic ingredients as fresh coconuts–distant joys, indeed.

Dickinson’s use of French chocolate and Caribbean coconut attests to how an increasingly global market was changing the culinary habits of even a small western Massachusetts town. In the house next door, where Emily Dickinson’s brother Austin lived with his new wife, the far worldlier Susan Dickinson wrote out menu cards for her elegant dinners with as many thirteen courses beginning with caviar and ending with coffee and Brie cheese.

Dickinson used baking to express her fondness for friends, often sending cakes and candies as gifts. When a young, not yet married, Susan was away teaching in Baltimore, Dickinson sent her treats: “You thank me for the Rice cake—you tell me Susie, you have just been tasting it—and how happy I am to send you anything you love,” she wrote (L56). Dickinson understood the strong bonds that sharing food creates. Her bountiful baking, her famous basket of gingerbread lowered to the neighborhood children, her many gifts of food, her practice of sharing recipes with friends—all present her not as a recluse, but as someone intimately bound to the community. “’Love’s oven,’” she wrote in a note accompanying a packet of her delectable caramel rule (chocolate caramel), “’is warm’” (L545).

Click here for a link to the recipe for Emily Dickinson’s gingerbread.