“How many times these low feet staggered”
-From Fr238

Edward Dickinson has been chided by some biographers for giving his young wife a copy of Lydia Maria Child’s popular household guide The American Frugal Housewife. Edward Dickinson had good reasons for frugality, living as the family did during these early years in the shadow of his father Samuel Fowler Dickinson’s increasing insolvency. Moreover, Child’s book expresses a new middle-class domestic ideal, that the good housewife, regardless of her wealth, should be intimately engaged with the details of domestic work. Emily Norcross Dickinson became just such a housewife, maintaining an immaculate and orderly home, and insisting that her daughters learn to do likewise. 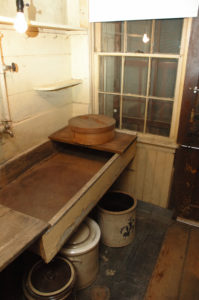 The washroom in the Kitchen at the Evergreens

The poet took pleasure in the sweeter culinary arts, baking the family’s bread and cake, but Emily Dickinson wanted nothing to do with cleaning. She complained of her more willing sister to one girlhood friend, “I don’t see much of Vinnie—she’s mostly dusting stairs” (L176). “God keep me from what they call households,” she prayed (L36). Her understanding of the dynamics of women’s work proves more complicated than these youthful tirades. The poem “How many times these low feet staggered” (Fr238) both registers the stultifying effect of housework on women’s lives and criticizes a society that fails to value the work of sweeping cobwebs and washing windows.

In March 1850 Edward Dickinson placed an advertisement in the local paper: “Wanted. To hire a girl or woman who is capable of doing the entire work of a small family. One who can come well recommended, may find constant employment and good wages” (Years and Hours, Vol. 1, p. 170). Mrs. Dickinson and her daughters worked alongside this hired help. The first Dickinson household servant whose name we know was Margaret O’Brien, a recent Irish immigrant who began working for the Dickinsons in the mid 1850s and stayed with them until her own marriage in 1865. Dickinson researcher Aífe Murray has suggested that Emily Dickinson’s lessening of poetic production after 1865 correlates not only to issues of health and emotional need, but also to the loss of regular domestic help at the Homestead.

The Maid’s room at the evergreens

In 1869 the Dickinsons hired another Irish immigrant, Margaret Maher, who had intended to move on to California in a few months, but instead stayed with the Dickinson family for thirty years. Maggie, as the family called her, proved an immensely important figure to Dickinson. Emily Dickinson’s letters are full of brief references to Maggie that present her very much as part of the family, despite her marked differences: “Maggie, good and noisy, the North Wind of the Family, but sweets without a salt would at last cloy” (L689). There is good evidence that the bulk of Dickinson’s poetic manuscripts were stored in Maher’s trunk, and the one daguerreotype we have of the poet is an image the family appears not to have liked, but that Maher kept, and offered as an illustration for the first edition of Dickinson’s poems.

The Dickinson household, like most rural homes of this period, included a small working farm. Behind the Homestead stood a large barn for horses, pigs, and a cow. The family kept chickens, and tended a vegetable garden, fruit trees, and on the other side of Main Street the Dickinson meadow grew wheat or rye. Hired yardmen did most of the farm work, and these men, by the mid-1850s all Irish immigrants, became important figures in Emily Dickinson’s life. Defying customary practice, she requested that six of the Homestead workmen, rather than the town’s leading citizens, carry the casket at her funeral. Thomas Kelly, who had married Margaret Maher’s sister Mary, served as the chief pallbearer.