The subject of death, including her own death, occurs throughout Emily Dickinson’s poems and letters. Although some find the preoccupation morbid, hers was not an unusual mindset for a time and place where religious attention focused on being prepared to die and where people died of illness and accident more readily than they do today. Nor was it an unusual concern for a sensitive young woman who lived fifteen years of her youth next door to the town cemetery. 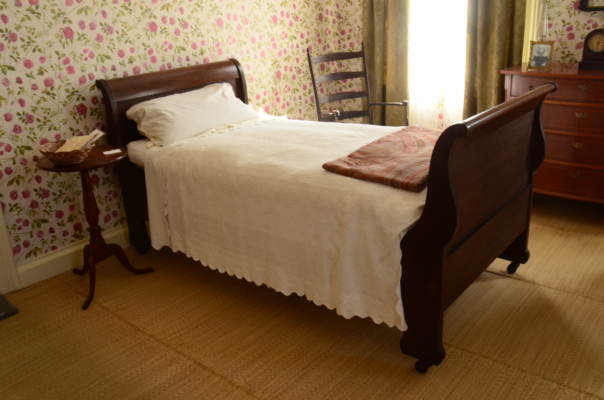 The poet’s death on 15 May 1886 came after two and a half years of ill health. From the time her nephew Gib died in October 1883 and she suffered a consequent “nervous prostration,” Dickinson became what her sister termed “delicate.” On two later occasions she experienced “blackouts,” and she was confined to bed for the seven months preceding her death.

During the 1880s Dickinson also endured the loss of several close friends – Charles Wadsworth, Judge Otis P. Lord, and Helen Hunt Jackson – and several family members, including Gib and her mother. The effect of these strains, the symptoms of severe headache and nausea mentioned in her letters, and her deathbed coma punctuated by raspy and difficult breathing, have led researchers to conclude that she died of heart failure induced by severe hypertension (high blood pressure). 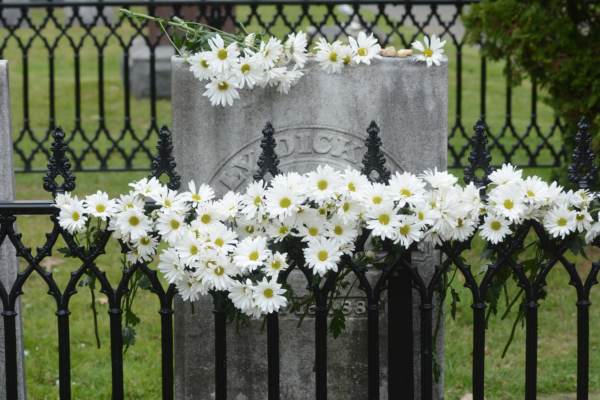 Dickinson’s Amherst physician, Dr. Otis F. Bigelow, was handicapped in assisting his patient by her reclusiveness, for she would not admit him to her bedside to take a pulse. “She would walk by the open door of a room in which I was seated – Now, what besides mumps could be diagnosed that way!” he is supposed to have said (Years and Hours, Vol. I, xxix-xxx). The “cause of death” that Bigelow entered on her death certificate was “Bright’s Disease,” at the time a general diagnosis that included hypertensive symptoms, as well as symptoms for nephritis, a disease of the kidneys. Although Dickinson scholars once assumed she suffered kidney ailments, no documentary evidence notes the distinct yellow pallor and characteristic odor associated with nephritis.

On her death day, her brother Austin recorded in his diary: “She ceased to breathe that terrible breathing just before the whistles sounded for six [p.m.]”(Years and Hours, Vol. II, p. 471). In a remarkable obituary for The Springfield Republican, Susan Dickinson wrote about her friend: “A Damascus blade gleaming and glancing in the sun was her wit. Her swift poetic rapture was like the long glistening note of a bird one hears in the June woods at high noon, but can never see” (Years and Hours, Vol. II, 473).

On a beautiful May afternoon four days later, Dickinson’s white-garbed body lay in a white coffin in the Homestead parlor, where the family’s former pastor Rev. Jonathan Jenkins of Pittsfield (Mass.) led a prayer and Thomas Wentworth Higginson of Cambridge (Mass.) read Emily Bronte’s poem on immortality, “No coward soul is mine.” Higginson, who gazed into the casket before it was closed for the service, reported: “E.D.’s face a wondrous restoration of youth – she is 54 [55] & looked 30, not a gray hair or wrinkle, & perfect peace on the beautiful brow. There was a little bunch of violets at the neck & one pink cypripedium; the sister Vinnie put in two heliotropes by her hand ‘to take to Judge Lord’” (Years and Hours, Vol. II, 475). 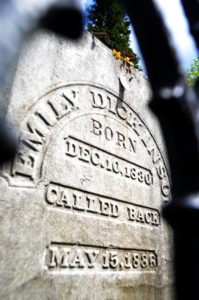 The honorary pallbearers, among them the president and professors of Amherst College, set the casket down after exiting the Homestead’s back door, and their burden was shouldered, at the poet’s own request, by six Irish workmen who had been hired men on the Dickinson grounds.

Following her late directions, they circled her flower garden, walked through the great barn that stood behind the house, and took a grassy path across house lots and fields of buttercups to West Cemetery, followed by the friends who had attended the simple service. There Emily Dickinson was interred in a grave Sue had lined with evergreen boughs, within the family plot enclosed by an iron fence.

Originally the grave was marked by a low granite stone with her initials, E.E.D., but some decades later niece Martha Dickinson Bianchi replaced it with a marble slab bearing the message “Called Back.” The title of a popular Hugh Conway novel, the words were also the complete content of a letter the poet sent her cousins as she entered her final phase of illness.