“War feels to me an oblique place,” Emily Dickinson wrote Colonel Thomas Wentworth Higginson in February 1863 (L280). Higginson was commander of the First South Carolina Regiment, which was comprised of African-American soldiers, and saw action in Florida and South Carolina. Dickinson had initiated a correspondence with Higginson, and sought advice about her poems, after his “Letter to a Young Contributor” appeared in the April 1862 issue of the Atlantic Monthly. 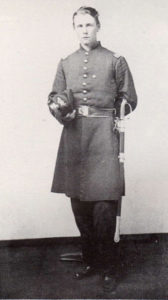 The years of the Civil War corresponded to Dickinson’s most intense period of productivity as a poet, during which she is thought to have written roughly half of her total number of poems, and yet her precise relation to the war remains something of a puzzle. She had friends like Higginson who fought in the war. Her brother, Austin (who paid $500 for a substitute, the standard way to avoid military service), was particularly close to Frazer Stearns, son of the Amherst College president. Stearns’s death at the Battle of New Bern, North Carolina, was a blow to the whole town, recorded in Dickinson’s moving letter above and also, possibly, in the poem “Victory comes late” (Fr195), which she sent to Samuel Bowles. Dickinson followed the war news closely, and in May 1865 wrote with satisfaction of the capture of Jefferson Davis and the rumor that he had been disguised in a woman’s skirt (L308).

Because it is the very nature of Dickinson’s poems to have a range of possible references, it is difficult to say whether a particular poem was inspired by the war. “It feels a shame to be Alive -” (Fr524) certainly seems like a response to the Civil War. In another letter to Higginson from the winter of 1863 (L282), Dickinson included the lines from another poem that could have been inspired by news of the war: “The possibility to pass/ Without a Moment’s Bell -/ Into Conjecture’s presence -/ Is like a face of steel” (Fr243). But it could just as well have fit Dickinson’s needs at the time, to share with Higginson her own sense of the danger he faced.

Though she told her Norcross cousins, perhaps in 1864, “I myself, in my smaller way, sang off charnel steps” (L298), Dickinson never wrote a poem as explicit in its patriotic fervor as, for example, Julia Ward Howe’s “Battle Hymn of the Republic.” Her poems tend to assume a less heroic, “smaller” posture. Her most direct participation in the war effort may have been the three poems that appeared anonymously, during late February and March of 1864, in a Brooklyn-based newspaper called Drum Beat, conceived for the purpose of raising money for medical supplies and care for the Union Army. These poems, as Karen Dandurand has argued, “must be seen as her contribution to the Union cause.”