“She dresses wholly in white, & her mind is said to be perfectly wonderful.”
– Mabel Loomis Todd on Emily Dickinson (Sewall, p. 216)

As Emily Dickinson’s writings have grown in popularity since her death, certain objects associated with the poet have become icons. Chief among them is the white dress thought to have been Dickinson’s. The dress is a typical house garment of the late 1870s and early 1880s, worn when Dickinson was in her late 40s and early 50s. But the posthumous fame of the dress’s owner has given the garment an extraordinary life of its own. For many of Dickinson’s fans, the white dress embodies the essence of their beloved writer. 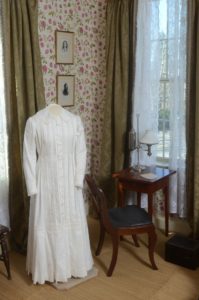 Emily’s iconic white dress on display in her room

The dress, made of a cotton fabric with mother-of-pearl buttons, is a style known as a wrapper or a house dress, worn by women as everyday clothing for doing chores and other activities inside the house. It was not a particularly unusual or expensive dress for its time. The dress is primarily machine stitched, with supplemental hand-stitching. The maker of the dress is unknown.

After Dickinson’s death, her sister Lavinia gave this dress to a cousin, Kate Ives Hall Porter, who in turn gave it to her sister Eugenia Hall (later, Hunt). Little is known about how or why the dress was given to the Halls, or about what happened to the dress while it was in her possession. In 1946, Mrs. Hunt’s daughter, Margaret Bradlee, gave the dress to the Amherst Historical Society. For many years the dress was loaned to the Dickinson Homestead for display in the poet’s bedroom. In 2000 the dress returned to the Amherst Historical Society, and a replica was made for display at the Emily Dickinson Museum.

Despite popular conceptions of Dickinson clad in her white dress, the poet herself never mentions wearing white, nor does she wear white in the few existing images of herself. The references that she does make to clothing, particularly in her twenties and thirties, reveal outfits that vary in material and color. In 1852, she wrote to brother Austin, away in Cambridge, “have you plenty of time before you come home, then try and match this bit of calico, and get me 10. yards of it? It is but a 12 ½ c[en]t. calico, but very pretty indeed, and as Vinnie has one, I think I would like to have one” (L 83). Later, Dickinson wrote to a cousin: “You seem to take a smiling view of my finery. If you knew how solemn it was to me, you might be induced to curtail your jests. My sphere is doubtless calicoes, nevertheless I thought it meet to sport a little wool. . . . Won’t you tell ‘the public’ that at present I wear a brown dress with a cape if possible browner, and carry a parasol of the same!” (L228)

Thomas Wentworth Higginson provides one of the few contemporary descriptions of Dickinson’s wearing white. After his visit to the Homestead in 1870, he recalled that the poet was dressed in “a very plain & exquisitely clean white pique & a blue net worsted shawl” (L342a). Local townspeople promoted the image of Dickinson in white. Shortly after moving to Amherst in 1881, Mabel Loomis Todd wrote to her parents of the town’s “Myth”: “She dresses wholly in white, & her mind is said to be perfectly wonderful” (Sewall, p. 216).

Did wearing the color white have symbolic meaning for Dickinson? The poet’s friends as well as subsequent Dickinson scholars have debated this question. Dickinson herself used white in her own writings to describe anything from the soul to a wedding gown. The complex religious associations with the color white would have been well known to the poet, a knowledgeable reader of the Bible. The poet heroine of Elizabeth Barrett Browning’s Aurora Leigh, one of Dickinson’s best-loved books, wore white. Yet white was also practical, easy to care for in a time when bleaching was considered a most reliable solution for cleaning soiled garments. Whatever the reason for her color choice, Dickinson was buried in white and enclosed in a white casket.