The cultivated world of plants, as well as the wildflowers, trees, and shrubs that made up Emily Dickinson’s Amherst, provided the poet with a constant source of inspiration and companionship. 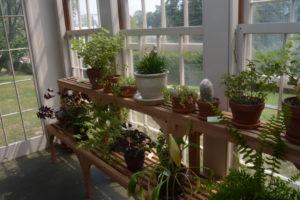 Emily Dickinson gardened throughout her life. At age 11, she announced to a friend: “My Plants grow beautifully” (L3). In her middle years, she was able to tend plants year-round in the conservatory her father added to the Homestead: “My flowers are near and foreign, and I have but to cross the floor to stand in the Spice Isles” (L315). A letter written just a few years before her death reminds us that Dickinson had to work to make such magic happen: “I am very busy picking up stems and stamens as the hollyhocks leave their clothes around” (L771).

Dickinson’s mother is generally credited with instilling in both Emily and her sister Lavinia a love of gardening. The family’s roses included a Greville rose (yellow and white) that Mrs. Dickinson is said to have brought to Amherst from Monson in 1828 and nurtured at the Homestead. Mrs. Dickinson was also known for her ability with sensitive plants, receiving a commendation from the local paper, the Express, for her “delicious ripe figs,” a “great rarity” in New England (Years and Hours, Vol. 1, p. 359).

Emily Dickinson also learned about plants in botany courses at both Amherst Academy and Mount Holyoke Female Seminary. During her school years she assembled an extensive herbarium (a book of pressed plants) that included more than 400 specimens, each labeled by the poet with its Latin name. The herbarium, now in the collection of the Houghton Library at Harvard University, demonstrates Dickinson’s intimate familiarity with her natural surroundings. 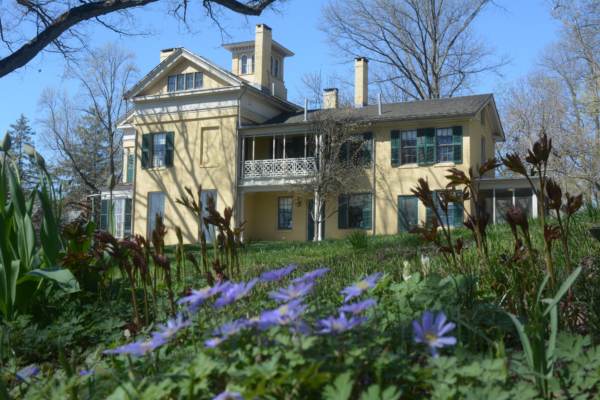 A view from the gardens.

In the Homestead garden, Emily, Lavinia and Mrs. Dickinson grew a great variety of flowering plants: shrubs, climbing vines, annuals, perennials and bulbs. Dickinson’s poems and letters mention roses, lilacs, peonies, sweet williams, daisies, foxgloves, poppies, nasturtiums and zinnias, among others. Although the exact location of the flower beds is unknown, Dickinson’s niece Martha remembered that “there were long beds filling the main garden, where one walked between a succession of daffodils, crocuses and hyacinths in spring—through the mid-summer richness—up to the hardy chrysanthemums that smelled of Thanksgiving, savory and chill, when only the marigolds . . . were left to rival them in pungency” (Bianchi, p. 2).

As a gardener, Emily Dickinson was attuned to the weather, the changing seasons, transitions in times of day, and the populations of bees, flies, and birds that dwelled among her plants. Her observations made their way into countless poems. An ominous thunderstorm gives notice in “The Wind begun to rock the Grass” (Fr796):

The speaker of “It will be Summer – eventually” (Fr374) muses from winter’s “pallid landscape” on the coming glories of summer:

As she became more reclusive, both Dickinson’s flowers and her poems served as emissaries for her. She sent both to friends and acquaintances to acknowledge birthdays, comfort in time of illness, or express condolences: “Intrusiveness of flowers is brooked even by troubled hearts. / They enter and then knock—then chide their ruthless sweetness, and then remain forgiven. / May these molest as fondly!” (L540)