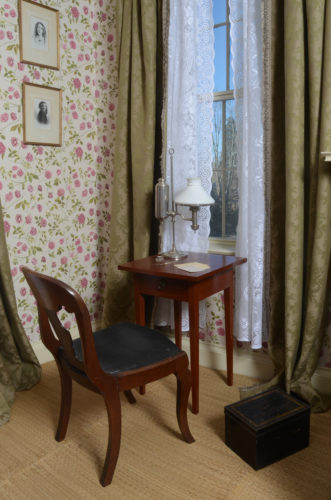 Although Emily Dickinson’s calling as a poet began in her teen years, she came into her own as an artist during a short but intense period of creativity that resulted in her composing, revising, and saving hundreds of poems. That period, which scholars identify as 1858-1865, overlaps with the most significant event of American nineteenth-century history, the Civil War. During this time, Dickinson’s personal life also underwent tremendous change.

In late 1855, Dickinson moved, somewhat reluctantly, with her family back to the Homestead, her birthplace. Her father had purchased the home in early 1855 and made significant renovations to it. The Homestead became part of an enhanced Dickinson estate when in 1856 Dickinson’s older brother, Austin, married her close friend Susan Huntington Gilbert, and the couple built a home next door known as The Evergreens.

That household was a lively nexus for Amherst society, and Dickinson herself took part in social gatherings there early in the couple’s marriage. Their lifestyle eventually would contrast markedly with her own, more reclusive manner. The couple’s three children—Ned, born in 1861; Martha, in 1866; and Gilbert, in 1875—brought much joy to Dickinson’s life, even though Susan’s developing role as a mother may have put more distance between her and the poet.

In addition to providing close proximity to her brother and his family, the renovated Homestead offered Dickinson several other advantages. Edward Dickinson added a conservatory to the Homestead, where Emily could raise climate-sensitive plants. Now she could engage in her beloved hobby of gardening year-round. And Dickinson had her own bedroom, the southwest corner room on the second floor, a space essential to her writing.

By the time Dickinson turned 35, she had composed more than 1100 concise, powerful lyrics that astutely examine pain, grief, joy, love, nature, and art. She recorded about 800 of these poems in small handmade booklets (now called “fascicles”), very private “publications” that she shared with no one.

Dickinson did share a portion of her poems with family and selected friends whose literary taste she admired. Susan Dickinson received more than 250 poems throughout the two women’s forty-year relationship, and to Thomas Wentworth Higginson, who authored an article in an 1862 issue of the Atlantic Monthly that encouraged young people to write and publish, Dickinson sent about 100 poems. Although a few of her poems were published in newspapers, they were printed anonymously and apparently without her prior consent. The vast majority of her work remained known only to its author.

Some events in Dickinson’s life during her intense writing period are difficult to re-construct. Drafts of three letters, now called the “Master Letters,” survive from late 1858 and early 1861. They suggest a serious and troubled (though unidentified) romantic attachment that some scholars believe drove Dickinson’s creative output. During this time Dickinson also referred to a trauma that she described in a letter: “I had a terror — since September — I could tell to none” (L261). The cause of that terror is unknown.

Significant friendships such as those with Samuel Bowles, Rev. Edward Dwight, and Rev. Charles Wadsworth changed during this time, and Dickinson began to feel an increasing need for a “preceptor” to cope with her outpouring of verse and with questions about publication.

In 1864 and 1865, Dickinson underwent treatments for a painful eye condition, now thought to be iritis, with Boston ophthalmologist Henry W. Williams. While under the doctor’s care (eight months in 1864, six months in 1865), she boarded with her cousins, Frances and Louisa Norcross. Those trips were to be her last out of Amherst; after her return in 1865, she rarely ventured beyond the grounds of the Homestead.